Congratulations to 2011 AL West winners Texas, who wrapped up their second straight crown under the tutelage of one Ron Washington, current manager and former shortstop for the Dukes of Albuquerque. In Keith Olbermann's tradition of posting cards for MLB managers as minor leaguers, here's a "serious face" shot from Ron's salad days. 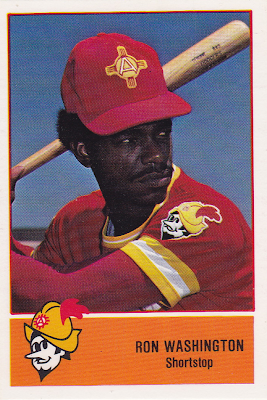 If there's one thing you can say about Cramer baseball cards, it's that they didn't skimp on quality color. Washington's red-heavy Conquistador uniform jumps right off the cardboard and into your eye sockets. (Albuquerque ditched the "conqueror" image some years ago and now play as the Isotopes.)

I haven't seen the Hollywood take on Moneyball yet, but look forward to the portrayal of Ron's role in developing young players for Billy Beane and Oakland during that era, including first-time first-baseman Scott Hatteberg. Washington came off as an old-school disciple in Michael Lewis's book, but so did just about everyone in those days, otherwise the stats-driven story wouldn't be so interesting. (For the record, Ron said he enjoyed the movie.) 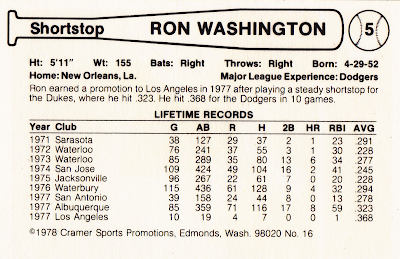 Cramer printed most of their minor league teams on thin, white cardboard that's reminiscent of 1981 Donruss. Collectors purchased complete sets at games or team stores for a few dollars and not many singles reached today's market; most price guides continue to price them only as team sets.

Value: This #5 cost $2 at MinorLeagueSingles.com. You can probably charge a Rangers fan something extra, given Ron's success at the helm.