1977 marked the first year Burger King licensed Topps' standard card design, front and back, to support both MLB team promotions and their sponsorship of local Pitch, Hit, and Run events, a baseball skills competition for boys and girls around the country. (It continues to the present day under the banner of Aquafina water.) Only Yankees appeared in this debut year, with 23 numbered players and one unnumbered team checklist for 24 total cards. 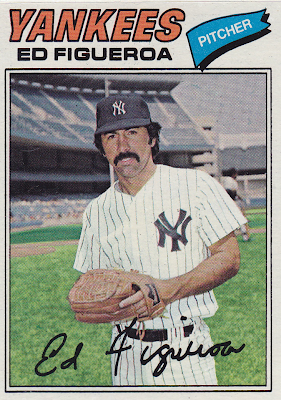 Burger King originally planned a 22-player set, but added Lou Piniella as #23 after their initial run. Why tack on Lou late in the game? Lovers of Steinbrenner drama should read The Curious Case of the 23rd Card in a Series of 22.


Other than Lou's special case, new acquisition Reggie Jackson stands out as the key card for set collectors and got a "real" stadium photo instead of Topps' airbrushing over his 1976 Baltimore uniform. (See them both at 1980 Topps Baseball's look at Burger King cards.) 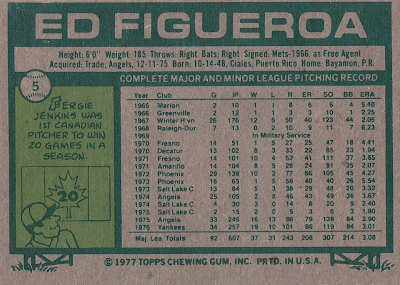 Today's card back taught me something new, that Fergie Jenkins was Canadian. The 284-game-winning HOFer hails from Chatham in southern Ontario and it's kind of a shame he didn't spend time with nearby franchises Toronto (northeast) or Detroit (west). Hometown appeal sells tickets!

With Figueroa in the books, I've profiled all nine vintage Burger King sets and recently "refreshed" the other eight entries with better scans. (No more french fry stains.) Ed has the distinction of appearing twice, once on today's angled stadium shot and in portrait for 1978.


Value: Ed cost $2 at a show in 2006 and probably hasn't changed in value since. #23 Lou Piniella's considered a short-print and runs several times other singles.

Fakes / reprints: Don't know of any reprints, but many collectors confuse early Burger King cards with their Topps equivalents, given the lack of a company name or logo. 1977 Topps (and O-Pee-Chee's) normal #5s are the MLB Victory Leaders, Jim Palmer and Randy Jones.
Posted by Matthew Glidden