After 30 years of opening packs, ticking off checklists, and stacking stacks of cards on other stack of cards, I can say it's a challenge to find individual players that shine, year after year. Aside from occasional design standouts like 1956 Topps that made everyone look good (set profile), most sets fit into a narrow design range, where action shots or unusual composition stick with you longer than individual names. Just a few all-timers float to the top: Jackie, Mantle, Ruth, Cobb...and Wagner. 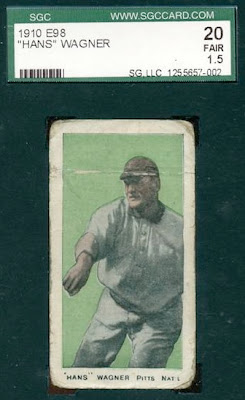 Today's card, printed by an unnamed company around 1910, is a contemporary of what collectors call the Mona Lisa of Baseball Cards, Honus Wagner's T206. Already worthwhile for his stature alone, enough mystery surrounds its issue, withdrawal, and rarity to hike both value and collector interest; no other card combines name and history like this deceptively simple portrait of The Flying Dutchman. (Read The Card for a detailed look at both the T206 Wagner legend and our hobby's past.)


In catalog terms, the "E" prefix for E98 indicates a candy set and today's design resembles several other 30-player caramel issues, such as E95 (set profile) and E96 (set profile). All use slim, tobacco-sized cards with full checklists on the back and most feature portraits or tight action shots with solid color backgrounds. It's possible these details are design mimicry instead of actual reuse, though, so modern collectors call it simply "Anonymous Set of 30" for lack of any publishing origin. (E95 and E96 both include Philadelphia Caramel Company bylines, shown in the set profiles.)

Are names like Cobb, Mathewson, Young, and LaJoie not enough card-buying challenge? Masochistic master set collectors also pursue the colored background variations, a goal that ramps up the significant set cost another several notches. Others go after an interesting E98 version with black and white fronts; the linked Net54 prewar thread discusses their history, which might (or might not) be test sheets discarded prior to adding color.


Old Put Cigars provided a small clue to the set's origin with their 5-cent ink stamp shown in the scan below. A small number of E98s include this stamp, which links it somewhat with that cigar brand. Unfortunately, this mark's no guarantee of a tobacco-only release, since prewar printers often sold advertising space on card backs to multiple advertisers. One possibility is that Old Put bought a quantity of cards, added their stamp, and packaged them in cigar boxes. Another is that they provided stamps to local sellers, who added the ink manually when customers bought in-store products.


Jefferson Burdick proposed in his American Card Catalog that Boston-based candy maker C. A. Briggs published the E98s, which explains why it succeeded their 1909-1910 E97 Briggs Candy, despite lacking the same "C. A. Briggs Co., Lozenge Makers" tagline. Some of Burdick's classifications later proved too simplistic (such as W516's co-mingling of 3 variations), so until a smoking gun links the "anonymous" set to a product and printer, E98 origins remain enigmatic and open to debate.

Fakes / reprints: Full-set reprints exist and people have faked the stars. Given their age and rarity, grading's the most reliable way to give sellers and collectors confidence in an E98's value.
Posted by Matthew Glidden

Thanks for sharing the info. Is that Old Put a "5 cent" cigar or a "5 count" cigar? My guess is on the nickel, making this a more perfect Number 5.

Yep, I bet it's a 5-cent cigar and thus doubly suitable.

Mathew,
Thanks for informing others about this awesome set! It is really neat to see cards that you own on a website. You can enjoy these two E98 Wagners, along with all of my other E98s, in my four registered sets on the SGC Registry website. And yes, I believe after my research,they are 5 cent (ct.) cigars.