On September 15, Panini announced a multi-year contract with the MLB Player's Association, the business arm of our pastime's players union. Topps retains exclusive permission to use on-card major league team names and logos, but more competition in a market usually means better options for buyers. Panini's main challenge will be the same faced by other MLBPA licensees: how can we make cards look cool without logos and uniforms? How do we look better than...this? 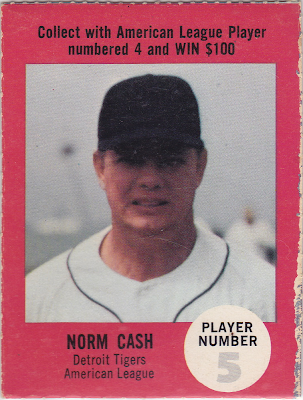 Atlantic Oil blacked out Norm's cap to avoid legal trouble with Topps, who claimed sole right to MLB team logos and cards packaged with gum. Instead of paying their own photographer, Atlantic licensed the photos (sans caps) used by Dexter Press in their 1967 set, which shows an unaltered version.


Atlantic put most of their creative energy into laying out the contest rules on card backs. Hard to say how well it turned out, but we know they didn't repeat the promo for 1969. 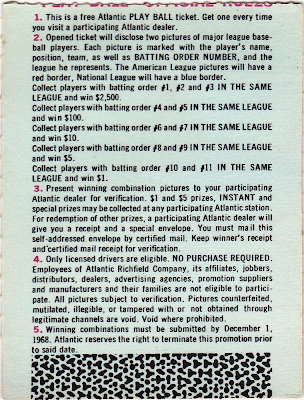 Atlantic Oil printed four different #5s for this contest and Norm's probably the easiest to find. This list links to my other profiles, which I just updated with new front-and-back scans for Yaz and Frank Robinson.

Value: Norm cost $3 on eBay, about average for low-grade oddball sets from this era. Fellow #5 Ernie Banks remains a white whale for my type collection, since he was intentionally short-printed for the $100 contest prize and is probably available only at auction.

Fakes / reprints: Haven't seen fake Norms in the marketplace, but it's possible for rarities like Banks. Look for the perforated edges, as each player came on a sheet.
Posted by Matthew Glidden