Today features our second player from the Wausau Timbers, a Wisconsin-based single-A club. The Timbers played in the Midwest League for a dozen years from 1978-1990, winning a single title in 1981 under Bill Plummer, former big-league catcher and future single-year Seattle manager. (Mariner fans know 1992 as Bill's Terrible, Horrible, No Good, Very Bad Season.) 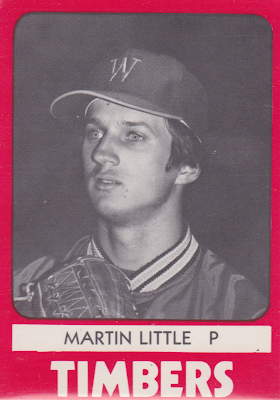 We're used to thinking of minor-league clubs as being either affiliates, which field players signed by a parent MLB franchise, or independent, where the team itself scouts and signs players. Wausau debuted as a Mets affiliate in 1978, but cut ties after one year and became a third kind of club, a co-op team that fielded players from multiple parent clubs. 1980 lineups came mostly from Seattle, with fill-ins from a handful of others. (I don't know of any 21st century co-op teams; if you do, please add them in the comments!) 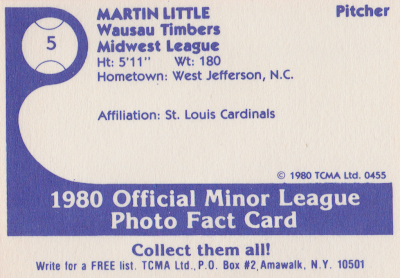 Due to the challenge in compiling stats for leagues with ever-changing rosters, TCMA went sans stats on many cards, though they at least note Martin played in the St. Louis system. He spent 1979 on the field in Gastonia, NC, a town that once featured the frightful Gastonia Rippers. Add that menacing name to a roster with the likes of Billy Queen, Jake Early, and Calvin Clinkscales for an instant summertime potboiler! Can "Big Jake" figure out who stole the team's jerseys before their late-season showdown with Statesville? And what does Calvin really keep in that private footlocker? Look for my serialized version in 2012 packs of Allen and Ginter...

Value: Martin Little cost $2 at MinorLeagueSingles.com. (Sellers on both Beckett Marketplace and eBay stock many of the 1980 TCMA team sets, if you're looking for the whole thing.)

I'd have to look to be sure but I think the last co-op team was Miami and I'm thinking that was sometime in the early nineties.

Cool, thanks! With today's level of franchise organization, I can understand why they're not common anymore.