I wrote about another "Pilots" team just two days ago, the single-A Tigers affiliate from Clinton, Iowa. You can guess by the stylized "P" that today's Pilots served in the Phillies farm system, following a long line of local teams that played for the Dodgers, Expos, Senators, A's, Astros, or independently from 1900-1970. 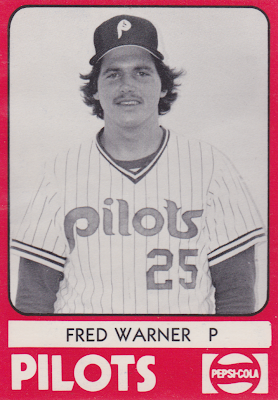 Unlike the short-lived flame-outs of earlier teams, these Peninsula Pilots found a long string of success in the 1980s, finishing with the  Carolina League's best record 4 times in 7 years. 1980 saw them go an amazing 100-40, a feat that earned them #74 in MiLB's top 100 seasons. 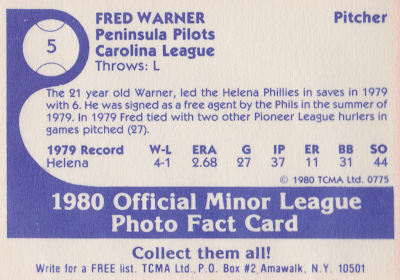 The ageless Julio Franco and former #5 type card Don Carman played with Fred Warner on that 1980 team and moved quickly to the big league level after dominating in the minors. Franco's especially amazing, lasting until age 48 (!) in the majors and playing a final season in Mexico before retiring in 2008. (Read "Being Julio Franco" by Jeff Passan for a day in his life.)

Note that Warner and Carman's cards share the same red-bordered design, since the Pilots issued two sets that year, one in color and another in black-and-white.


My hunch is that the team's amazing first half (51-19) excited fans so much that they sold out of the black-and-white sets and team marketers decided to splurge on color for the rest of the season. That's one more #5 for me!

Value: Singles from this set cost a dollar or two. The black-and-white set's currently on eBay for ~$1 per card.