Fresh-faced and slightly befuddled, Mike Nocciolo's showing off a lot of stripes on his Gulls uniform. Jersey stripes, pant stripes, shoe stripes, and even sock stripes. (The only thing without stripes, the Cardinals look-a-like cap, is sleight-of-hand rather than true St. Louis gear, as Salt Lake City dropped the inset "T" from their stylized SL logo.) 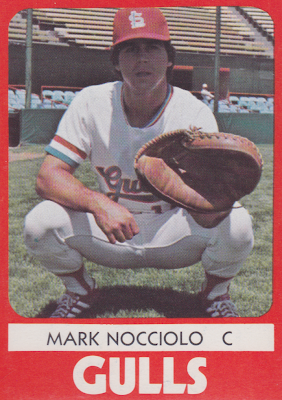 For those who don't like stripes: huge catcher's mitt! They make any uniform awesome. 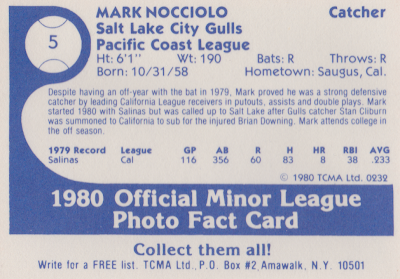 This dense card text calls back to a previous profile, 1975 TCMA #5 Stan Cliburn, who made space for Nocciolo by jumping from Salt Lake City to California. (Mike's own leap from single-A to AAA marked his top level in pro ball.)

Minor league rosters being fluid like they are, Cliburn moved from the Angels to the Pirates organization later that year and both men spent 1981 as opponents in the AA Eastern League, Mike catching for Holyoke and Stan for Buffalo. Though Nocciolo hung up his gear after 1981, Cliburn went on to play for nearly two decades and continues to manage at the minor league level. As of 2011, he helms the American Association's Sioux City Explorers.

Value: This #5 cost $2 at MinorLeagueSingles.com, about right for singles from that era.