Baseball's not a kind game to most players. Even with pro teams dotting all of North America, the opportunity for success falls between slim and none. Greg Kline's own minor league stats show how most pros experience America's pastime: a brief year or two of scorching summer practices wedged between high school and their "adult career." Being born and raised in Pennsylvania, Greg's first month in Bristol, Virginia probably felt fun and close to home. By the start of that second season on Iowa's river banks, though, I bet he was looking at other options. 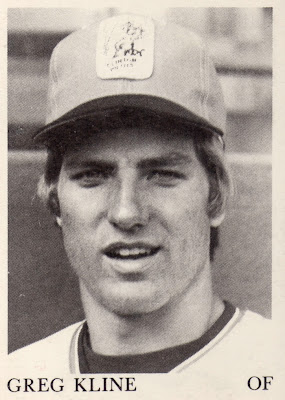 I can barely pick out details from that patch on Greg's hat, so it's handy that TCMA also printed Clinton's tiger-on-a-boat team logo on card backs. (The town sits just west of the Mississippi's River and shipping's been an economic and cultural essential since the heyday of 19th century Midwestern lumber mills; the tiger denotes their Detroit affiliation.) 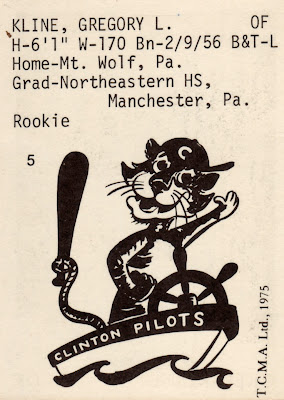 Like last week's Wausau Timbers, the Pilots spent some time as a co-op affiliate of multiple teams, fielding players from five MLB franchises in 1976. Jim Leyland managed for three years in Clinton and 11 total in the Tigers minor league system, making his current stint with Detroit a homecoming of sorts.

Value: Find most 1975 TCMA Clinton Pilots singles at CheckOutMyCards for $2.50 each.

Fakes / reprints: Haven't seen any in the marketplace, though it'd be easy to fake with modern equipment.
Posted by Matthew Glidden