I'm off to Wisconsin in a few days, so let's kick off the 4th of July weekend by checking out a team from the Great Lakes region.

Today's guest, Bob Blake, turned his 11-game 1978 single-A debut season into a nice start for 1979, picking up 7 wins early and earning a midyear promotion to Minnesota's AA affiliate in Orlando. It's hard to imagine culture shock like switching from dairy farms to Disneyland, but I know what I'd miss: pasties. 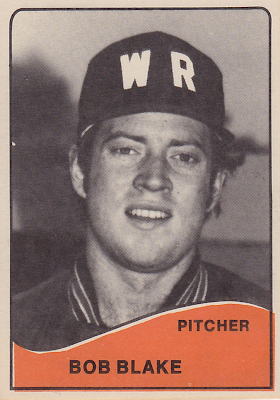 This erstwhile Twins affiliate franchise played 21 seasons in Wisconsin Rapids, at what looks like the state's geographic center. (It's eerily centered, almost a target dot.) Even though they folded back in 1983, a connection lingers to current-day ball through Phillies manager Charlie Manuel, who served his very first year during the squad's very last season, going 71-67. 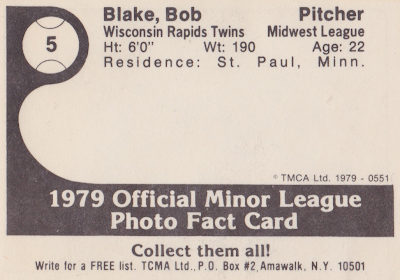 After parent club Minnesota bumped Blake from single-A Wisconsin Rapids to AA Orlando, he pitched about the same number of innings, but gave up a bunch more homers and runs. As a St. Paul resident, I suspect Bob preferred the northern climes to a possibility of toiling for years in the Florida sun, so hung up his cleats after 1979. 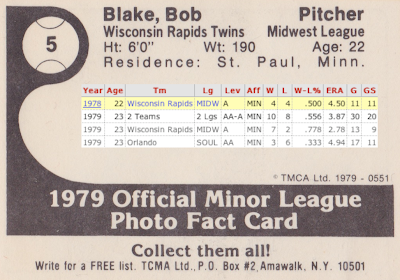 You could fit stats for his two pro seasons on this black back, so I did so, thanks to his Baseball-Reference entry.

Value: This #5 cost $2 at MinorLeagueSingles.com, about right for non-star minor league cards.

Fakes / reprints: Haven't seen any in the marketplace, but you could fake the look pretty easily with modern equipment.
Posted by Matthew Glidden