It's been three days since July 4th here in the U.S., just long enough to come down from all those patriotic burgers, bratwursts, and BBQ ribs. Stomachs don't feel so crazy anymore, eyes don't bulge at the sight of mayonnaise, and belts fit a little better. Does that make it safe to talk about food cards? Potato chip food cards? Let's hope so. 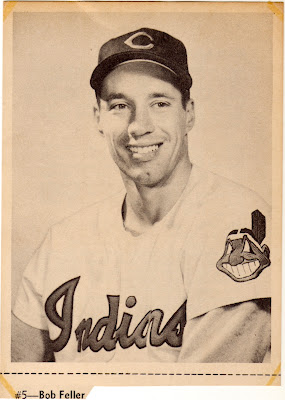 Num Num Foods, makers of pretzels, chips, and other snacks, published a pair of vintage photo sets profiling the Cleveland Indians. They started with an unnumbered 36-count version sold as a "photo pack" to stadium visitors in 1949 (and by mail in 1950), which included facsimile autographs on the front and promotional hand stamps on the back. They followed it in 1952 with two permutations of a numbered 20-card set, one (like Bob Feller) with a cut-away tab below its picture and another without, the latter published by the team itself.

Today's card got an awkward trim because Num Num buyers could trade a complete set of 20 card tabs for an autographed baseball. Someone snipped the redemption tab away but wanted to save "#5--Bob Feller" on its front. Hope they still got their ball! 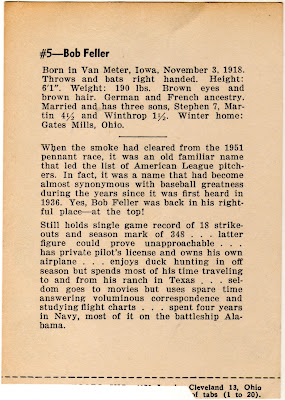 Like other card makers before them, Num Num severely short-printed one player from this set (#16 Bob Kennedy), encouraging kids and parents to keep buying snacks in the hope of finding that elusive last card. Capitalism! America! *BURP*

Hat tip to blogger ALL TRIBE BASEBALL for pictures of the Bob Feller tribute (and post-game fireworks) at Cleveland's 4th of July, 2011 game against the Yankees. There's a great statue of Bob and his sweeping leg kick delivery outside the stadium, always worth a visit if you're in the area.

Value: This Feller cost me $45 on eBay a few years ago. Trimming the tab knocks a card's value down at least by half, in addition to any other damage or staining.

Fakes / reprints: Haven't seen any personally, but assume there have been modern reprints, given the ease of doing so with current technology.
Posted by Matthew Glidden