Tom Terrific comes right to mind in any discussion of all-time pitchers, given his overpowering fastball and full award shelf, including 1967's Rookie of the Year, 1969's World Series title, a trio of NL Cy Young awards (1969, 1973, 1975), and 13 All-Star selections. While his career after age 32 slowly dropped to just "great," that first decade rates as "otherworldly." 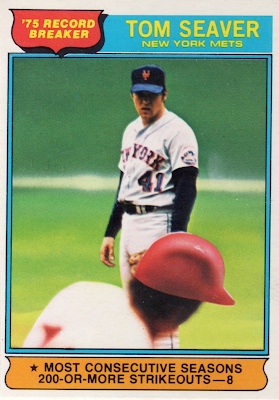 Card front
Other than their required French translations, O-Pee-Chee's 1976 set matched Topps player-for-player, shot-for-shot, and (ugh) airbrush-for-airbrush. Check out the blurred "batter" that #5's art editor inserted, weird helmet and all. It's a baffling addition to that standing pose and Tom would be better served with a full windup. Why, Topps, why? 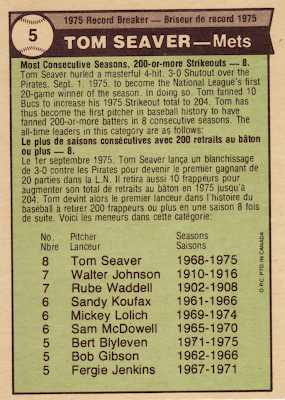 Card back
I picked this card in part to recognize 2011 Hall of Famer Bert Blyleven, another of a pitching handful to dominate batters one-on-one, year-after-year. Both Seaver and Blyleven ran active 200+ K streaks as of the card's printing and then extended them into 1976, totaling 9 and 6 seasons respectively (career stats at B-R.com). Congratulations, Bert!

Value: Hall of Famer or not, mid-70s cards don't cost much; 1976 Topps #5 is just 25 cents at Check Out My Cards. OPC versions are harder to find, but not much more valuable.

Great card but that air-brushing is painful to look at.