I've long been fascinated with winter baseball, since many players follow warm temperatures south once America's regular season wraps up. Venezuela, Puerto Rico, Mexico, and the Dominican Republic all own long league histories, with a vast number of Latino players starting their careers there. Since it's effectively another "minor league" (but stocked with big-league talent), MLB maintains an active presence there and every organization fields dozens of farm system prospects. 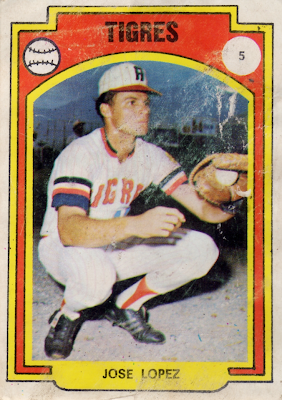 Card front (blank back)
Being 1972, this isn't Jose Lopez, the former Seattle (and now Colorado) infielder. Instead, it's Jose Angel Lopez, a Venezuelan native who spent 7 years in the Houston and St. Louis farm systems (minor stats at B-R.com). It was nigh-impossible for fans to track multi-country prospects in those days, but MLB.com now gathers off-season pro ball in five countries under their Winter League home page umbrella. These links alone all taught me things I didn't know. 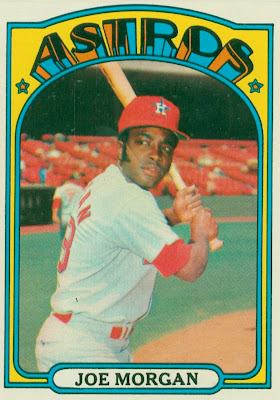 Aqua on yellow? Must be 1972 Topps
Venezuela loves baseball with a capital "L" and local leagues printed their own cards as far back as 1916. Many post-war designs crib directly from Topps American sets or follow them in spirit. Their 1972 issue took a stab at the psychedelic look, with high-contrast borders and player name on the bottom edge. (Card numbers move to the front, since they're really blank-backed stamps destined for mounting in team albums.) The excellent Caribbean card site CubanBall.com hosts a more-or-less complete gallery of past Venezuelan sets.
Value: Mr. Lopez cost $10 on eBay a few years ago. Venezuelan cards are affordable if you avoid the big league stars.

wow, fascinating stuff...I had no idea that these sets existed

They're quite a collection of pictures and styles! Check the research work done at the Topps Archives, if you want more details.