2011 Hall of Fame inductee Bert Blyleven played for 5 different teams across his 22 seasons, but one of his seasons, Pittsburgh's 1979 title winner, stands out as enigmatic for a guy used to taking the mound every scheduled day, year after year. Could it possibly be odder than those black-on-gold beehive hats and wide-wale pant striping? Let's find out. 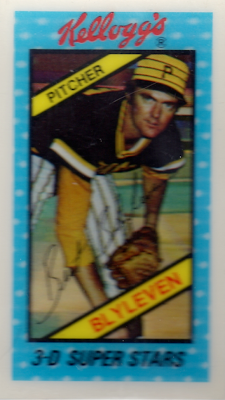 Card front
Blyleven went 12-5 in 1979 and struck out 172 batters, totals that seem low for his 3.8 WAR (wins above replacement), which placed tops on a pretty good Pirates staff. Seventeen decisions looks like a guy who spent time on the DL, but Bert took the mound every scheduled time, 37 starts in all. So how did all those appearances become "only" a dozen wins?


Based on 1979's box scores, Bert went two weeks between decisions five different times, a steady pulse in the arc of his season. On opening day, Blyleven threw 7 innings of 2-run ball, but Pittsburgh lost in 10 innings. By my count, he started 9 different games that went to extra innings, a lost cause for pitcher wins no matter how good their curveball. I'm sure he doesn't begrudge the World Series ring, but there must've been frustrating days watching from the bench. 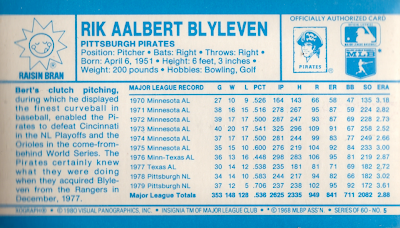 Card back
"Bert's clutch pitching, during which he displayed the finest curveball in baseball, enabled the Pirates to Cincinnati in the NL Playoffs and the Orioles in the come-from-behind World Series. The Pirates certainly knew what they were doing when they acquired Blyleven from the Rangers in December, 1977."

UPDATE: Kellogg's offered this 60-player set in various brands of cereal, but specifically featured Raisin Bran on card backs. Collectors could acquire them one-per-box or buy the complete set by mail order.

Value: Kellogg's singles run a dollar or two. Cards quality improved by the late 1970s and their plastic fronts tend to crack less than early sets.

Fakes / reprints: Doubt anyone would try faking Kellogg's cards and haven't seen any in the market.
Posted by Matthew Glidden

Just curious. I noticed that in the upper left hand corner it says Raisin Bran. Were other Kellogg cereals depicted on the back as well, or did these 3d's only come in boxes of Raisin Bran? Thanks.

Good question! Every card says Raisin Bran, but Kellogg's packaged them in a variety of cereal brands. I've added that to the entry.

Thanks for the update Matthew. I had no idea you could actually purchase the set via mail order back then. Would you happen to know how much the cost was? That's cool. Thanks again.

Don't know for sure, but probably a few dollars and/or lots of box tops. I've seen references to "mail order" in catalogs and on-line, but never with a price attached.