Baseball fans fidget throughout January, waiting for pitchers and catchers to report. Clocks tick in slow-motion, gloves stiffen for lack of use, and team caps gather dust. This season can hit especially hard in New England, since a snowplow seeing its shadow means several more weeks of winter. Our collective test of endurance drips by so snail-like that a single-serving website measures it at SpringTrainingCountdown.com. (This Feb 14, send your favorite fan some candy hearts that say PLAY BALL--they'll love you for it.) 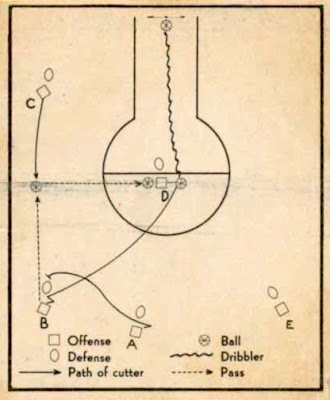 Card front
Of course, baseball isn't EVERYTHING to the sports world, since two of our "big 4" pro leagues hit their stride when flakes start falling. Today's #5 profile pictures one of those, basketball, and matched the NBA's third season tip-off in late 1948. It also coincided with an expansion from eight to twelve teams, reflecting the roundball's growing success and fan base. (Two of its founding franchises--Boston Celtics and New York Knicks--retain their original city and moniker.)

Bowman's hand-tinted coloring of black-and-white photos precedes their 1949 baseball issue, so is the first appearance of this love-it-or-hate-it design. The set also interspersed bird's eye diagrams (like this #5) with their player photos, probably to help new fans understand on-court strategy and action. Its 72-card checklist contains the Mona Lisa of basketball rookies, Hall-of-Famer George Mikan. 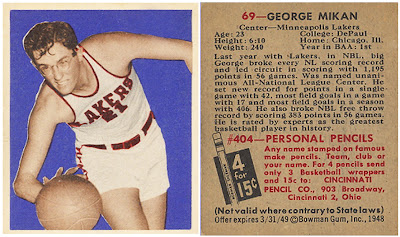 1948 Bowman Basketball #69, George Mikan
Compared to Mikan's detailed bio back and "famous make pencils" ad, the diagrams read like simple "INSERT TAB A IN SLOT B" instructions from high school shop class. Most of these plays remain basketball staples, despite the overall evolution and sophistication of modern offenses. 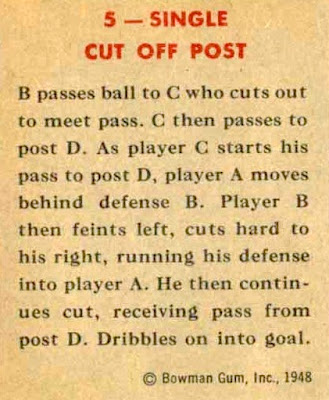 Card back
Value: Based on eBay searches, dealers charge $10-20 for low-grade 1948 diagram cards. Actual players cost more and stars (mostly Hall of Famers) jump much higher, given the rarity and demand.

Fakes / reprints: Bowman reprinted this set as an insert in 2009, so look for that date on card backs.
Posted by Matthew Glidden

Email ThisBlogThis!Share to TwitterShare to FacebookShare to Pinterest
Labels: 1940s