1979 marked the 15th season that Montreal-based candy maker O-Pee-Chee licensed a baseball set design from Topps for their Canadian customers. It included "only" 374 cards, just half the 726 found in America's set, but otherwise matched its spirit and execution. Canada loves them some hockey, so I'm pretty sure OPC designed and printed baseball cards late in the NHL season (i.e., April) and sold them during the puck-free summer months. This brief selling window probably led to its shorter (and less expensive to print) set size. 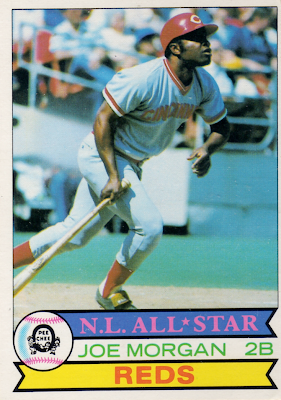 Card front
In my opinion, Topps action photography really improved by 1979 and Morgan's just one example. Face shadows aside, that's great timing on a high shot to right field.

Following his HOF playing career, Joe moved on to announcing and ultimately occupied ESPN's Sunday Night Baseball color commentator chair for many years. That run ended after 2010, a move hailed by fans who consider Morgan a virtual statue in the press box, unwilling to allow for modern perspectives on statistics and players from past eras. (I see him as a classic storyteller and self-aggrandizer, something that worked 20 years ago, but that few fans in the current ESPN demographic find interesting.) 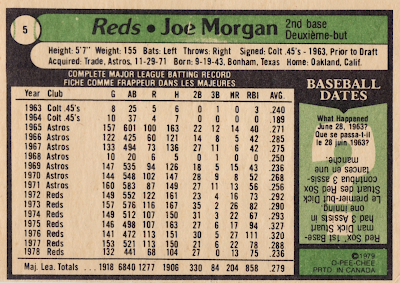 Card back
OPC started with the Topps template in 1979, but mixed things up a bit in both checklist and card design.

See the annotated checklist at Super70s.com for more on these details and a comparison of each team change at Oh My O-Pee-Chee's 1979 card profiles.

Value: Like most 1970s-1980s stars, ungraded Morgan cards cost a couple dollars at most.