This week (late Jan 2011), former NFL star (and current mixed martial arts fighter) Herschel Walker said that he'd like to return to football at age 48. Not sure if that's predicated on the looming work stoppage and some kind of replacement team for locked-out union players, but his comment made for an interesting pre-Super Bowl distraction and tangentially reminded me of 70s underwear model and Oriole HOF pitcher, Jim Palmer. 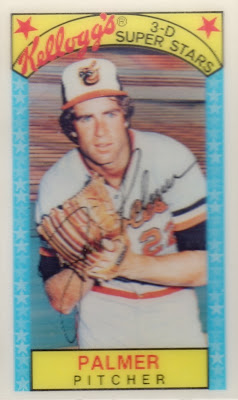 Card front
Palmer retired in 1984 with 268 wins, 3 Cy Young awards, and 3 World Series rings, all excellent support pillars for HOF election in his first year of eligibility. Many considered him a shoo-in for Cooperstown by the late 1970s, both for his personal fame ("underwear model" will do that) and as a key piece of Baltimore's great success in the 1960s and 70s.

Walker's announcement took me back because Jim also un-retired in 1991--a year after reaching the HOF--and joined Baltimore for spring training. Jim's comeback only lasted two innings of a single game, however, before he hung 'em back up--and that's in a non-contact sport. There's no questioning Herschel's toughness (MMA at 48!), but expect the same story to play out should he try a gridiron return. 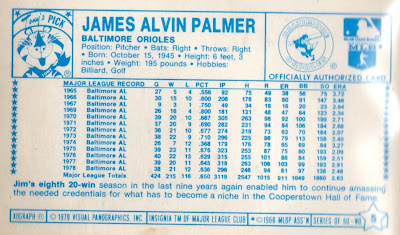 Card back
Kellogg's settled into their sorta-3D niche by the late 1970s and this 60-player set repeats what worked for them throughout the decade. According to the Key Man Collectibles 1979 profile, three print runs spawned a bunch of variations, so the master set contains over 100 cards.

Value: Most Kellogg's cards cost a dollar or two and even less if they have any surface cracks. Find Palmer and plenty of others at Check Out My Cards.