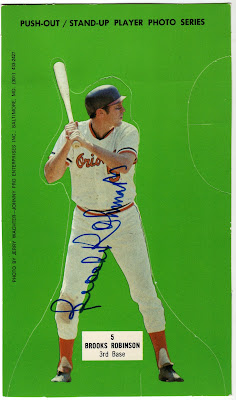 Card front (blank back)
You can punch out both picture and stand to create an array of 5" tall players, but most cards still in the hobby remain like today's example, un-punched and flat.

This blog profiled Johnny Pro's other Brooks Robinson card, the "fielding" variation that better fits his reputation, in Feb 2010. Check it out at 1973 Johnny Pro Orioles #5.

Value: I found this card, autograph and all, on eBay for $10.

Fakes / reprints: Folks don't reprint over-sized cards very often, so the Brooks autograph's a bigger "risk" for fakery. (Fortunately, I picked this up for the card itself.)
Posted by Matthew Glidden

Brooks signs anything and everything you put in front of him (or so I've heard), so chances are that's a legit sig. I have quite a few, and they generally don't command the kind of dollars to warrant forgery.

I agree with Beardy, Brooks signs everything and that looks like a few that I have.
I really like the side view showing his short brimmed helmet. Very unique!

Thanks for vetting it, guys--and if another one turns up, I'll let you know. :-)