This card shows "Wahoo Sam" playing catch with someone off-panel, but folks in those days knew him as a top-tier batsman. Crawford started playing in the 19th century, before parks used outfield fences consistently, so power hitters often placed among the leaders in triples, a skill modern fans associate more with speed. (No fences meant no automatic homers back then--batters had to hit the ball deep and run it out.) 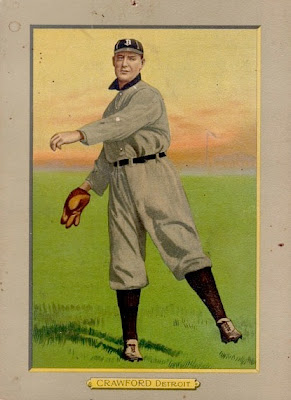 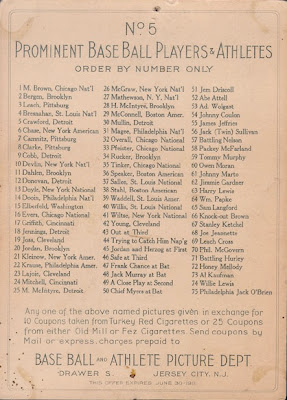 Fakes / reprints: Several T3 reprints exist and there's no doubt people faked the most valuable stars. Modern companies also adapted the painted look for 21st century players, one of the best throwback designs to choose from.
Posted by Matthew Glidden

There have also been reprints of the T3 set done in the modern 2 1/2-by-3 1/2 inch size as well. I still get the occasional query through my website about them.

This set is one of the "great whales" that I'd love to land a specimen from.

Plenty of beautiful cards in the set, too. My favorite name's "Knock-out Brown" and he happens to be one of the cheapest T3s on eBay right now.