Massachusetts-based National Chicle Gum published their 192-card Batter-Up set across 3 years, 1934 to 1936. The high series (#81-192) contained today's promotional bonus, a 20-booklet insert of "How To" pamphlets. At 3" x 4", they're larger than the actual cards, so came folded in quarters. Collectors refolded it vertically to make it look like a tiny book. Check the scan's vertical "guide," with back page to the left and title on the right. The second scan shows the "inside" pages. 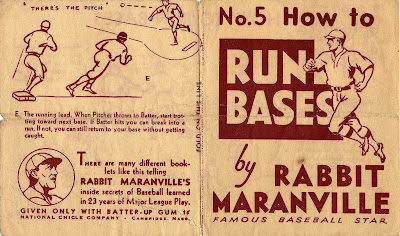 National Chicle attributed the series to HOFer Rabbit Maranville, who played 23 seasons of energetic middle infield and chipped in 1 partial season as Cubs player-manager. While not a superior player, his firecracker personality and showmanship made Rabbit widely known. (In the 30s, that was about enough to get you in the Hall.) 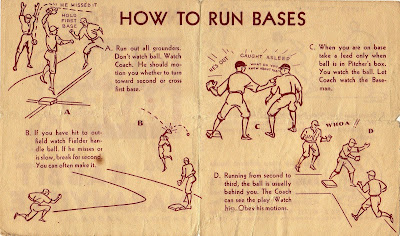 These 20 booklets (Old Cardboard gallery here) cover basic playing skills, but include interesting esoterica like "how to pitch the out-shoot," "in-shoot," and "drop." (In modern parlance, those are the slider, screwball, and sinker.) "How to Run Bases" covers the main points for any level of player: run everything out, move with the pitch, and watch your coaches.

Base running remains a major issue for teams, fans, and baseball writers. Recent Angels teams get credit for superior station-to-station play, the Royals apparently suck at it, and Boston and New York run more than they used to. Today's era of more powerful lineups mean that managers worry less about scratching out single bases, but team performance definitely suffers if they neglect the basics. (In the spirit of a better game, I will consider offers from the KC front office for Rabbit's helpful guide.)