Philadelphia won their first World Series (over Kansas City) in 1980. As Wikipedia notes, that made them the last original MLB franchise to capture a title. Today's guest started game 4 of that series, threw 22 pitches, allowed 4 runs, committed an error, and retired exactly 1 batter. Willie Aikens took him deep, his 1st of 2 homers on the day in an eventual 5-3 KC win. (Fortunately for Larry and the Phils, they won in 6 games.) 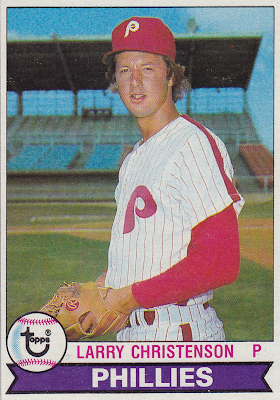 Burger King published a number of oddball sets from 1977 to 1987, including a handful of team-specific sets. Who did they pick for this honor in 1979? Why, it's the Phillies and Yankees! Such odd prescience for a company focused on quick turn-around. 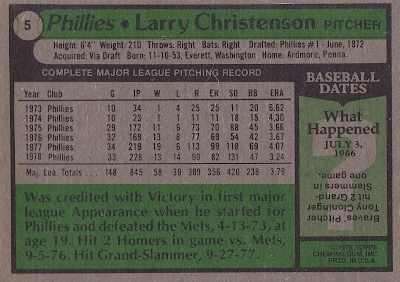 Topps licensed their 1979 design to Burger King as-is, so collectors often find them "mixed in" with the regular set. While the numbering obviously differs--Christenson is Topps #161--the 22-card burger checklist includes a few notables.


The Super70s.com profile of the PHI and NYY sets includes an image of the Philly checklist and summary of both releases. I like team-based releases, so will add more Burger King #5s soon.
Posted by Matthew Glidden