Today' guest made a home state debut in 1889, winning 12 games for the Indianapolis Hoosiers as a fresh-faced 17 year-old. He started 22 games and finished 11 as a reliever, hurling 225 innings total and striking out 109 batters. That's a full season by today's pitching standards, but barely hinted at Amos' next decade as a moundsman, when he'd average over 400 innings and total 245 victories. 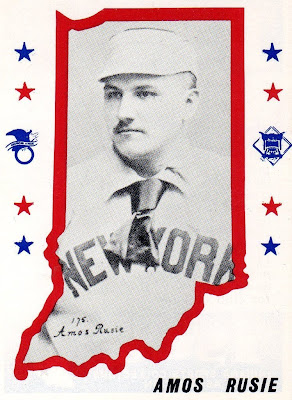 The Indiana Sports Collectors Association published this bicentennial-themed 26-card set in 1976 to honor local players and teams who contributed to baseball's considerable history. The checklist contains plenty of name-worthy guys; Don Larsen and Gil Hodges are 2 of the non-HOFers. I assume sets went out to ISCA members, making them hard to come by today. 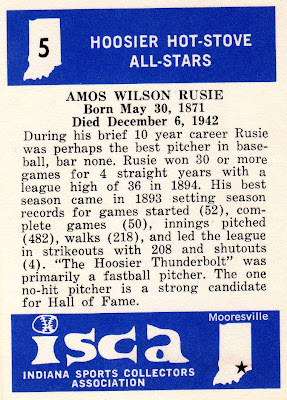 Two things stand out on Rusie's card, "strong candidate for [the] Hall of Fame" and "brief 10 year career." Indeed, the Veterans Committee voted Amos onto a plaque for 1977, validating the ISCA's editorial acumen. Fellow Hoosier (and card #14) Hodges nearly joined him the same year by receiving 58% of the BBWWAA vote.

So is it better to burn out than to fade away? Like previous #5 guest Dizzy Dean, Rusie's career included a block of dominant performance followed by a quick fade. 3 appearances for Cincinnati in 1901 count as a "season," which snuck him past the HOF's 10-year career minimum. It's not clear if anyone remained alive to lobby on Amos's behalf--as former Gashouse Gang members benefited from Frankie Frisch--so his selection's probably deserving, if plucked from a different epoch.
Posted by Matthew Glidden