As of Nov 3, 2009, the Phils need a pair of wins on hostile turf to defend their 2008 championship. From the other dugout, the Yanks can do what Steve Carlton and Tug McGraw did to KC in 1980 by finishing the series at home in 6 games.

Manny Trillo won the first two Silver Sluggers for NL shortstops in 1980 and 1981, batting around .290 (with over 100 OPS+) each year. While he didn't burn up the base paths or hit for much power, 3 Gold Gloves and 4 All-Star appearances say something about his overall contributions to the team. 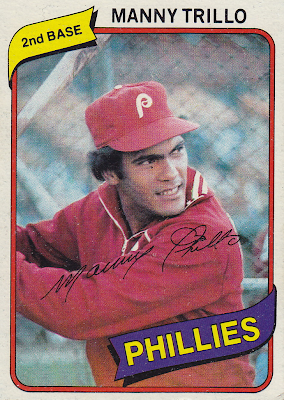 Like the 1979 Burger King Phillies set, 1980's version licensed Topps' own design, front and back. They added a BK logo, used different poses for a few players, and created a new card for manager Dallas Green, but otherwise let the layout speak for itself. (Capewood Cards did a nice profile of the whole set in 2008.) 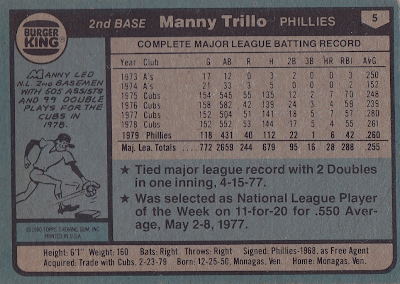 Manny's the 1st player to start the All-Star game for different leagues in consecutive years. He represented Philly in 1982, but went to Cleveland for 1983 in the widely disparaged 5-for-1 Von Hayes trade. 88 games and 1 AL All-Star start later, the Tribe sent Trillo to Montreal for a minor leaguer and cash. He finished the season with Les Expos, became a free agent, and signed with San Fran prior to 1984. After a mediocre couple of years in the bay, he played productively for Chicago from 1986 to 1988 and retired after a handful of games with Cincy in 1989.

UPDATE: Baseball-Reference.com recently added a "Card of the Week" feature, profiling both cards and stats related to the pictured player. Its first entry featured the 1981 Fleer card of Lonnie Smith. Despite being on a 1979 Rookie Stars card, Topps didn't make a normal 1980 card for Lonnie. They did, however, craft a version for Burger King, #14 from today's set. 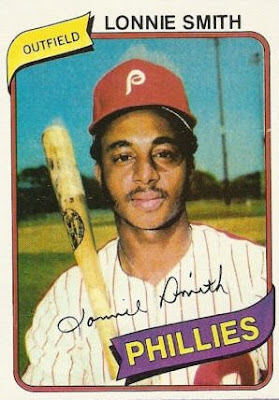 Read more at B-R's Card of the Week!
Posted by Matthew Glidden