This card's baby blue sky and super-orange everything else reminds me strongly of the classic 1933 Tattoo Orbit set. Joe's door knocker nose and ear-flap hair look so charmingly anachronistic, I can almost ignore the pink script and lime green borders. We heart the 1970s! 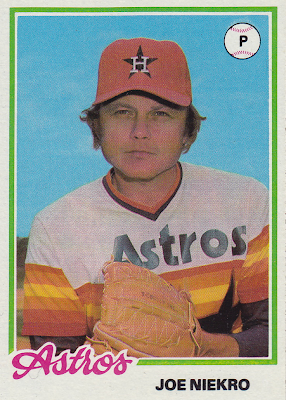 This blog already examined Burger King team sets from 1979 and 1980, but didn't say much about the card fronts, as Topps used relatively neutral designs. Their quartet of 1978 issues, on the other hand, revel in a plethora of pinata color combos. (For maximum entertainment, links go to actual pinatas.) 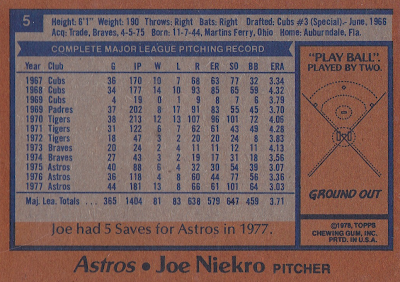 1978 marked Joe's career mid-point, 10 years removed from a 1967 Cubbie debut and 1987-88 swan song for Minnesota. 11 years as an Astro marked his longest tenure for any team; peep the classic "Houston black hat" look at his Wikipedia page.

Joe and brother Phil won a sibling record 539 games, including a shared wins lead (21 each) in 1979. In 1980, Niekro pitched a 10-inning, 1-0 shutout in the NLCS. Houston lost that series, but he went on to win a World Series ring with the Twins in 1987, not long before Jack Morris threw his own legendary 10-inning shutout for Minnesota's 2nd title. On the flip side, Phil never won a title in 26 years of throwing knuckleballs, but did reach Cooperstown in 1997.
Posted by Matthew Glidden

Sure, can you list which sets? I know of #5s in these non-US sets: