Back in mid-1978, Philadelphia traded veteran outfielder Jay Johnstone to New York, perhaps as depth for their run to October. He pinch-hit, played some OF, and DHed five times, as the Bombers went on to beat the Royals in the ALCS and LA in a 6-game World Series. 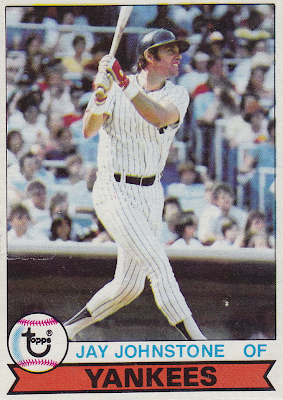 After a slow start in 1979, more trade winds took Jay to San Diego, and he eventually landed in LA for the 1981 rematch series, won by the Dodgers. That raises an interesting question--how many players captured titles with both the Yankee and Dodger franchises? 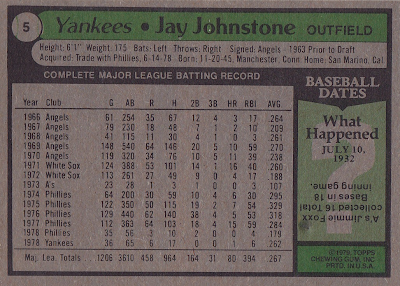 Like the 1979 Burger King Phillies, the Yankees set differs from Topps' normal offering in renumbered players and a separate checklist card. Off-season acquisition Tommy John also got his own Yankee card (#9), instead of Topps #255 (as a Dodger).

Value: Though loaded with stars like Reggie Jackson, Thurmon Munson, Ron Guidry, and Catfish Hunter, you can find complete Yankee sets for under $10 and single cards for ~$1.

Fakes / reprints: No reprints that I know of, but people sometimes confuse BK cards for the regular Topps.
Posted by Matthew Glidden