Many 1970s oddball sets seem like a Google Image Search for "old baseball photos." The sheer quantity of player images out there, even for obscurities like Robert Joseph Thorpe, would fill out a ton of issues, if actually organized and printed. 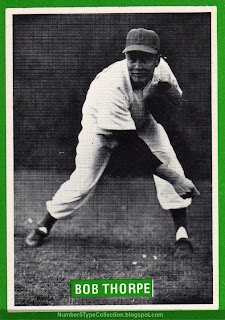 Collector and businessman Larry Fritsch pulled together a bunch of otherwise hard-to-find fellows as One-Year Winners. 1977 was the first of 3 "OYW" series and its 18 card checklist includes Eddie Gaedel and Chuck "The Rifleman" Connors.

Many OYW stories could also be called "one-game wonders," such as pitchers who made a single impressive appearance or batters who went 3-for-3 and never played again. Bob Thorpe didn't blow anyone away for the Cubs, but he did go 69-44 in the minors. 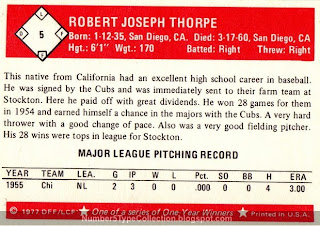 Against all odds, there's at least one autographed OYW card out there. Mr. Fritsch still offers complete series on his web site and individual cards on eBay, where #5 (and other "commons") cost $2 or $3.
Posted by Matthew Glidden

I always meant to pick up this set. Now, like everything else, it's too expensive for me. Maybe I'll just pick up a few singles.

A couple of my friends collect players who only appeared on 1 card and this set contains several of them. Is that part of the appeal for you?