Who's a prolific writer and wants Harold Baines in the Hall of Fame? Probably this guy.

...but also WhiteSoxCards, a 3-year record of South Side baseball and card interest. You can catch at least one new entry each day and sometimes two or three. Most qualify as one of the site's Regular Features.


Another hallmark is the variety of custom cards, something I consider a raison d'etre for the Internet's very existence. My favorite's the 1986 Topps version of George Foster's last stop. 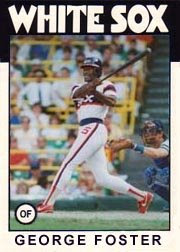 Mean Mr. Foster played his final 16 games for the ChiSox in 1986, collecting a single homer (career #348). Interestingly, he garnered 2 triples in that competitive fortnight and handled 20 left field chances without error. (George peaked extremely well for the Big Red Machine, but wasn't good enough for long enough to get serious Hall of Fame consideration.)

WSC does a lot of trading, so drop him a line if you have extra pale hose cards kicking around!
Posted by Matthew Glidden

I hadn't seen the Foster one. He did a good job on it.

Yeah, it'd be nice to see that kind of attention to detail on regular sets, matching team colors to borders and so forth.

Thanks for the shout out. I have some cards for you that I will send out this week.

Great! Aaaaar-dsma aside, some Sox oddballs from the National are headed your way soon.