TCMA produced a variety of oddball sets throughout the 70s (and into the 80s), most of which profile a specific team, decade, or list of all-time greats. This 90-card set, 1977's "The War Years," picks out the lesser talents left behind when World War II claimed baseball's top-flight players. Today's guest played a marginal role on Detroit's 1940 pennant winning team, but proved essential for their 1945 championship, going 27-14 with a stupendous 33 complete games. He finished 2nd in MVP voting to teammate Hal Newhouser, himself the only pitcher to win back-to-back awards. 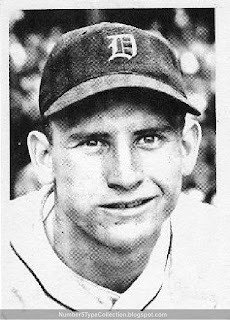 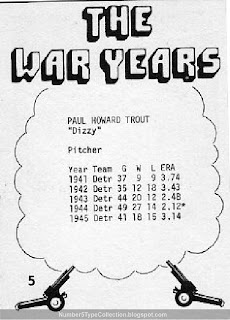 
The backs include stats from 1941 to 1945 and give a "*" to league leaders, like 1944 ERA champ Dizzy. Want to win some sports bar bets? Ask who did better in any of these career stats, Trout or Dean.


"The War Years" complete sets can cost $50 or more, an annoyance for something rarely sought by collectors. Individual cards should be $2 or less, though will vary by seller. (I picked up Mr. Trout a while ago on Beckett marketplace.)

I'm with you on the "annoying" part of trying to scoop up something VERY few people if anyone else really wants. A lot of older minor league sets have BIN of $15+, and if that wasn't bad enough, some people will even break them up and sell individual players for that amount. And NONE of it moves!

Very cool set! Try to see if I can score it on the cheap somewhere.

I really looked forward to eBay's growth loosing the bonds of hard-to-find oddballs (and at affordable prices). It does some good, but many folks overestimate values as you described. Would it do any harm to just auction things like this for a $10 opening bid?

My Daddy met Dizzy on a WWII prison ship where Daddy was guarding some German prisoners.

Dizzy was touring the ship. He looked at those prisoners and told Daddy,"They shore don't look like no supermen to me."

Isn't that the truth! Sounds like a cool encounter.