Today's guest appears on two different #5s, the previously reviewed 1960 Bazooka and this over-sized 1964 Topps "Giant." He won 209 games for 4 different teams, more than half as an Oriole. Still two years removed from being infamously traded for Frank Robinson, our 24 year-old Pappas looks positively sanguine in piped uniform and blue undershirt. It's one of my favorite members of the type collection. 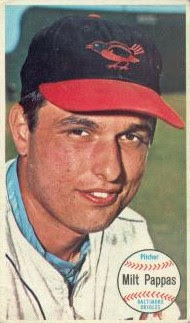 Even for a pitcher, Milt's batting line seems bizarre. In 1962, he reached base safely 7 times in 75 plate appearances, including 5 extra-base hits, 4 homers and 1 double. 15 strike outs for every walk! 1960 batting average of .043! A single stolen base in 17 years! Sans the occasional long ball, he's a one-man argument for the designated hitter.

This large issue, each card more than 3" x 5", remains popular with collectors. Its 60-count checklist includes 19 Hall-of-Famers and features some great photos. Several short-prints frustrate completists, but the set's relatively inexpensive as a whole. The Mickey Mantle card's a gem, if you're looking for a nice-but-affordable card of Topps' favorite son.

That is a nice set. The short prints are frustrating, but it's a nice set to have.

Milt Pappas has a very simular record to Hall-of-famer Don Drysdale, eventhough the Big D played in a definatel pitcher's park. Life is just not fair.

Drysdale had a lot of help getting there, that's for sure. I think appearing in 5 World Series made a big difference in his successful candidacy.