This blog normally focuses on vintage cards, 1980 and earlier, but that's not the whole story of my type collection. At the binder's far end resides about 100 newer #5s, including Fleers, Donrusses, and other, shinier issues. Prolific blog White Sox Cards added to that total earlier this month with 4 more!

I know the middle two players well, but definitely hadn't seen the Coolbaugh or Calderon cards before. (Few players show up without a hat, so Ivan's 1991 Classic stands out from the crowd.) The package also included a bunch of Seattle Mariners, my hometown team from 1979 - 1999, wootwootwoot. Can they stay in the wild card hunt this year? If only the Red Sox played all of their remaining games against the Yankees and Seattle got the pre-Wild Thing Cleveland Indians from Major League...

The second arrival's also very cool, a "Holy Firetruck!" prize winning from Carl Crawford Cards. The blog recently ran a contest to win some autographed Virgil "Fire" Trucks cards and I came away with the pictured 1950 Bowman. Yesyesyes! 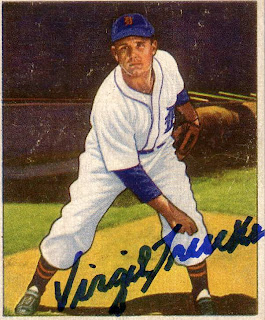 When I featured CCC as a type site, the post highlighted a 1976 Topps #66 Buddy and Gus Bell card. Sure enough, his envelope included the same card as a bonus.

Thanks for all of the above, guys!