Today's guest served lengthy tenures both on the field and in the coach's box. He followed an unremarkable run as Philadelphia's shortstop with a handful more as their manager, but couldn't lift them from the second division. (This scan shows him in Philly's natty uniform.) He shifted to the Yankee clubhouse in 1927 to coach the team better known as Murderers' Row, where Fletcher remained through 2 decades and 9 titles. (Wouldn't you?) 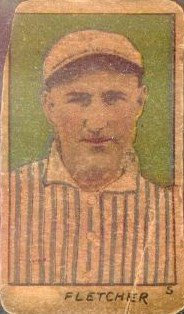 Art's career batting performance sat at exactly average, an OPS+ of 100, but he regularly led the league in being hit by pitches, "punching up" his on-base percentage somewhat. Four World Series appearances as a New York Giant produced no wins, so I assume 2 soaring decades coaching the Yankees proved more satisfying.

Ungraded strip cards command fairly low prices, given their crude design and typically poor edges, and you can find them for less than $10 online or at shows. Someone trimmed my Fletcher pretty well, but it lost a corner and picked up several creases in the last 90 years. It cost $12 (including postage) from eBay in 2004. If you like old cards and can accept the simpler design, it's much less expensive--if relatively challenging--to assemble W520s compared to the monster T206 set.