Today's guest bashed an amazing 573 HRs over his lengthy career with the Senators, Twins, and KC Royals. Like many fans, I completely forgot about that final year in powder blue, but 1975/76 SSPC #168 brings it all back.

Jumping directly to the majors as a 17 year-old bonus player, Killer played in the Washington infield sparingly from 1954-58 and knocked a sparse 11 homers. Once he found full-time duty at third base, his compact, powerful stroke knocked 73 more out of the park in '59 and '60. While the team's poor overall performance prompted their move to Minnesota in 1961, Harmon's offensive power and affability served as the franchise's face for more than a decade.

1968 marked a low point for Killebrew, in part due to the honor of making another All-Star game, hosted in the Houston Astrodome. He unfortunately suffered a leg injury fielding a throw at first and sat out half the season, dropping his HR count below 26 for the only time between 1959 and 1972. (See the 1968 All-Star Game broadcast post at The Fleer Sticker Project for details.) 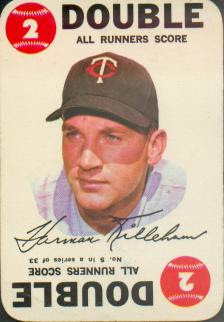 Topps inserted this 33 player set into 1968 packs, with a checklist that includes 11 HOFers and Pete Rose besides. (They also sold a complete, boxed set for those with less patience.) I play its flipping game with trading friends every now and then, since it's already in low-grade. Rounded corners and generic card backs made them easy to flip, but more challenging to grade. GFG.com provides a scan of what to look for.

Value: When people ask for interesting oddballs to collect, I point them here. They're cheap to get in lots, include some nice portraits, and make for a fun game. Complete low grade versions go for as little as $30 and don't take up much space. Buy two, so you can play with a friend!

UPDATE: Bonus KC Killer content over at Baseball Card Recollections, where they created a 1976 Topps card-that-never-was.
Posted by Matthew Glidden

The though of Killebrew in a Royals uni is pretty strange. Not sure I'd ever seen that before. I mean, with guys like Carew, he's Mr. franchise for the Twins and it's hard to imagine him playing anywhere else.

Yeah, I don't blame Topps for not making one, though they followed through with Aaron's final stint as a Brewer...

Just updated the blog with a link to a collector-generated 76 Topps card. They did a nice job.

It is a minor crime that the Killer ever became a Royal. He should have been only a Twin. I guess that he thought that he had one more year in him.