It's already a fortnight since Cleveland's 2009 National Sports Collectors Convention, where I talked briefly with ESPN.com Page 2 writer Paul Lukas. Afterwards, he found and linked to this blog, which sent visitor counts through the roof for several days. All was normal Monday and then Tuesday jumped to 75 times that amount. (Baseball bloggers take note, on the outside chance that happens to you.)

Paul's show summary highlighted my best find, a 19th century #5 from Allen & Ginter tobacco. My card's the "Sub Rosa" version, but the set also appeared in packs of their "Dixie" and "Virginia Brights" cigarette brands. (A 2007 Robert Edwards auction listed it with both N48 and N508 catalog numbers; the "N" prefix means "19th century" in most cases.)


The picture looks innocuous, but there's a lot going on. Let's break down the (very) old school details.

N48/N508 cards have a similar feel to their famous contemporary, Old Judge Cigarettes. 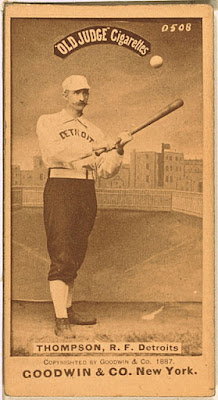 BONUS CONTENT: check out Wikipedia's entry for the Latin phrase sub rosa. Is that what cigarette companies market to our 21st century governments? :-)

UPDATE: eBay Bidding recently concluded (at $1300!) for this larger cabinet card with a similar concept. It's also printed by the Allen & Ginter tobacco company, bears the title "Black Stocking Nine," and advertises their Virginia Brights cigarettes. 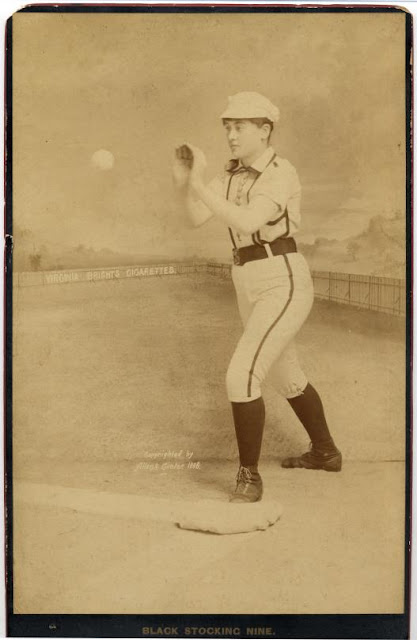