Blog Bat-Around: If I Were the Commish...

Tribecards.net posted a challenge to fellow bloggers on Monday. MLB commissioner Bud Selig's plans to retire in 2012, 42 years after starting his baseball "career" by buying the bankrupt Pilots and moving them to Milwaukee. He might or might really not step down, having already worked beyond one announced retirement date (2009). But let's say it happened and you got the job. How should our national pastime's overseer carry the torch? 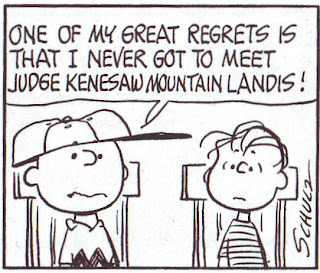 Peanuts tribute to baseball's 1st commissioner
I cribbed this list of events under Selig's tenure (1992-present) from Wikipedia.
Some folks focus on a commissioner's philosophical stands--such as how to treat Pete Rose and whether to "penalize" rich or lousy teams--but most of the above are about money.

I propose these 5 changes to re-tune baseball and make folks some extra money without throwing tradition and principles onto the dung heap.

1. Invite foreign teams to play in spring training. Our Grapefruit and Cactus Leagues are already a mishmash of split squads, college exhibitions, and walk-ons. Adding foreign teams should improve scouting of international players, bring out a wider array of fans, and increase interest in otherwise low-impact games.

2. Make DH available to both leagues, but only by managers agreement. Unless both say "yes," no DH for that game. Strategically, teams would still sign (and pay) these big-stick, no-glove players. Tactically, they might do a lot of pinch-hitting. Pitchers who can also hit become more valuable, since they increase the team's flexibility. (LaRussa's already on record against the DH, so you'd never get to use it against him.)

3. Let stadiums set their own mound height. Higher mounds favor pitchers, just as closer fences favor hitters. Back in 1968, it stood at 15 inches and today it's at 10. Allowing teams to re-grade their mound between 10 and 15 inches on each off-day gives managers another way to match a lineup to its stadium and circumstances.

4. Give a seasonal post-mortem on player safety. Football deservedly takes heat for recurring head injuries, which may cause earlier disease onset and even death. This is an opening to portray baseball as the "safer" sport for both fans and future players. Show how coaches, equipment, and medical staffs work now and plan to improve in the future. (This is a longer-team goal, so doesn't create revenue directly.)

5. Here's one for us collectors! Create an online "team lineup" set for every game as an incentive to attend. Take pictures of all players who appear and create a card for each one, dated to that game. (MLB could do them in-house or by license to Topps.) Make them available within 24 hours for viewing and purchase by ticket-holders. Tying uniform or bat cards to specific games will also please higher-spending relic collectors.

#1 and #5 would add new revenue, #2 and #3 are interesting rule permutations, and #4's most "important," since it covers the health of baseball's players.

Thanks for the challenge, David, I had fun thinking through it!
Posted by Matthew Glidden