In the mid-60s, printing services became affordable enough for dealers and serious hobbyists--often one and same--to craft cards for fellow enthusiasts. Sport Hobbyist magazine made such a set in 1963, reprinting several rare cards in black-and-white (with their own ad backs) for subscribers. (Here's my #5 profile of their M101-5 Jack Barry).

Industry pioneer TCMA focused their 1970s collector sets on retired players and defunct teams. They sold cards via mail order and at card shows, since "candy store" customers wanted the guys under MLBPA contract with Topps.

With paper collecting no longer a mega-industry, this 21st-century collector "market" belongs to Internet custom-card makers. Bloggers like Slangon, White Sox Cards, and (SCD editor) Bob Lemke add to the long tail of sports fandom, filling in missing cards for their favorite teams and adding artistic flair where Topps went vanilla. It's a pretty sweet deal for you and me! 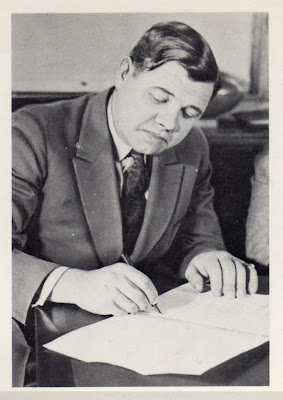 Card front
Check out The Babe in action! Look at him grip that pen! Much of "Babe Ruth Classic" pictures him away from Yankee Stadium. It's really an 80-card photo story of the Bambino's life, which was probably cheaper to assemble than great game shots. 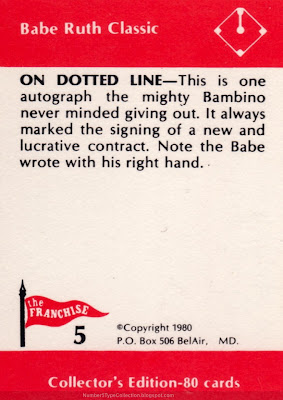 Card back
Pretty sure this set's a one-off from The Franchise, which I assume was a card shop or mail-order dealer. Add a comment if you know more about its fate!

Value: Found this on eBay for $3, which was fine with me. The complete set's out there for under $50, if you're a patient shopper.

Fakes / reprints: Many cards in this set reprise famous Ruth images, so I doubt it'd be worth re-reprinting.
Posted by Matthew Glidden