Not to be outdone by the Bambino's suit-and-tie look from yesterday's Babe Ruth Classic set, this uniformed shot makes even Ty Cobb nearly unrecognizable. Such a stately pose also belies his duties in America's chemical weapons unit, since restricted as inhumane for battlefields. (Wikipedia covers WWI use of poison gas specifically, dubbing it "the chemists' war.") 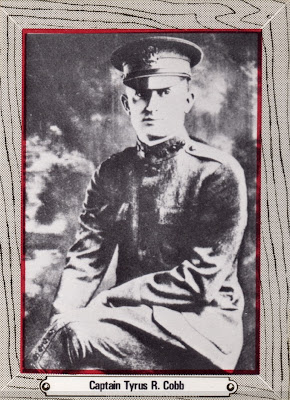 Card front
Cobb served only 2 months overseas, returning to play most of the 1919 season. He added managerial duties for Detroit starting in 1921, but failed to deliver a championship in 5 years, partly because of tight-fisted ownership. (The Tigers returned to prominence not long after, winning 1934's AL pennant and 1935's World Series.) 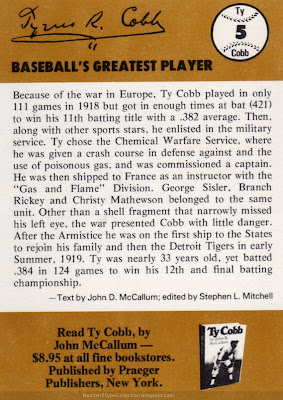 Card back
This 20-card, Cobb-only set helped promote John McCallum's eponymous book. It's not particularly attractive, but faux-frame borders make it stand out, even from other oddball issues.

Before we forget the Babe, remember that his growing power career threatened to eclipse Cobb's finesse game, leading to personal conflicts both on and off the field. Wikipedia devotes a long paragraph to their competitive apex, as the Peach went on a slugging tear to prove a point.

"After enduring several years of seeing his fame and notoriety usurped by Ruth, Cobb decided that he was going to show that swinging for the fences was no challenge for a top hitter. On May 5, 1925, Cobb began a two-game hitting spree better than any even Ruth had unleashed. He was sitting in the dugout talking to a reporter and told him that, for the first time in his career, he was going to swing for the fences. That day, Cobb went 6 for 6, with two singles, a double, and three home runs. His 16 total bases set a new AL record. The next day he had three more hits, two of which were home runs. His single his first time up gave him 9 consecutive hits over three games. His five homers in two games tied the record set by Cap Anson of the old Chicago NL team in 1884. Cobb wanted to show that he could hit home runs when he wanted, but simply chose not to do so. At the end of the series, 38-year-old Cobb had gone 12 for 19 with 29 total bases...for his part, Ruth's attitude was that 'I could have had a lifetime .600 average, but I would have had to hit them singles. The people were paying to see me hit home runs.'"

Value: eBay turned up this #5 for $3. No single card stands out in this set, which you can find complete for under $30.

Fakes / reprints: Don't think anyone would profit by faking this set, Cobb or no Cobb.
Posted by Matthew Glidden