Today's #5 calls back to one of the 1950s toughest sets, Missouri's own Rodeo Meats Athletics. The original's an attractive, 38-player issue celebrating baseball's debut in Kansas City. Its hand-tinted pictures echo 1954's Bowman and Red Heart sets, both stand-outs in the vintage era. But what makes it so hard-to-find for modern collectors?


At this 3-way nexus sits 1955 Rodeo Meats, an issue rare enough that there's only 1 complete set registered at PSA as of Sept 2010. By comparison, 21 collectors own graded 1952 Topps sets, with nearly 100 scarce high numbers and the Mantle rookie. 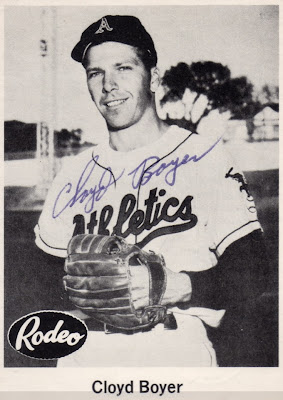 Card front
Oddly enough, this "commemorative" card uses a different picture than the original, which even had two poses to choose from. 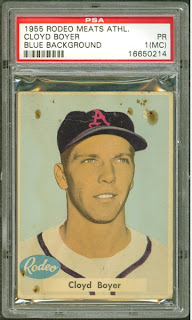 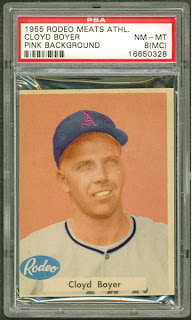 (original, pink background)
Cloyd's new pose isn't the only change between this "reprint" and Rodeo's original issue. Fronts (above) replace pastel colors with black-and-white photos. Backs (below) feature player bios instead of a mail-in offer for a collector's album. 38 unnumbered cards in 1955 become 28 numbered players in 1976. (A title card and checklist round it out at 30.) 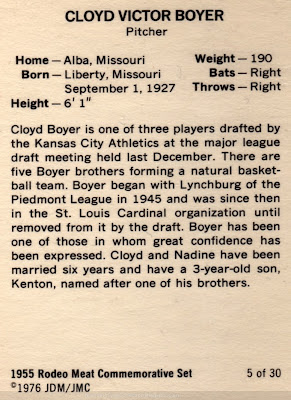 Card back
Guides call this a reprint, but I have a different theory. JDM/JMC sold it directly to collectors at a time when few knew what real Rodeo cards looked like. No doubt acquiring a full set would've cost serious money, even in those days. Why not print pictures of KC players from 1955 and just name it after a notoriously rare regional issue to pique curiosity? A few photos match between the two, but it's clearly not an exact copy. That "commemorative" label is more accurate, if somewhat misleading.
Value: Boyer cost me $5 on Beckett Marketplace. Several singles from the same set are on eBay for ~$7. (Search for Rodeo Meats.)
Fakes / reprints: Don't know if anyone would fake this commemorative set. Card-for-card reprints definitely do exist for the 1955 Rodeo Meats, so seek those out if you want an original look without spending thousands of dollars.
Posted by Matthew Glidden