100 years after its 1910 publication, "Tinker to Evers to Chance" (from Baseball's Sad Lexicon) remains one of the sport's most enduring refrains. Chicago's famous double-play combo named Frank Chance last because he manned 1st base, with Tinker at short and Evers at second. While decent players, the trio's simultaneous HOF induction in 1946 says more about post-WWII nostalgia for happier times than their particular playing skills. 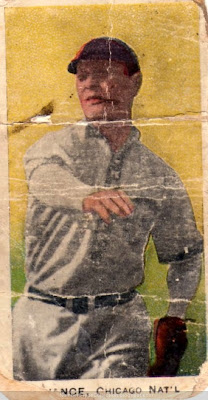 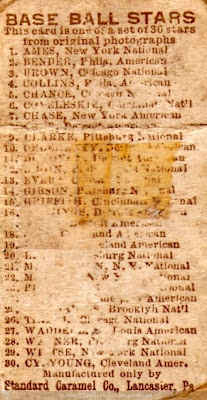 Card back
Each Standard Caramel card uses the same back, a checklist of all 30 players. They're numbered almost in alphabetical order--notice how the "C" players munge together, with Chance coming between Collins and "Coveleskie" (actually HOFer Stan Coveleski).

Value: Not many E93s survived to the present day, so even low grades prove expensive. This poor/fair HOFer cost about $200 on eBay.

Fakes / reprints: Folks have both "officially" reprinted this set and faked individual players. Genuine card stock closely matches T206s and other tobaccos, but has a much glossier front.

UPDATE: Here are "clean" versions of the front and back. (Pretty sure they're scanned from a reprint set, with whiter card stock.) 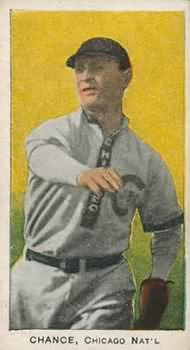 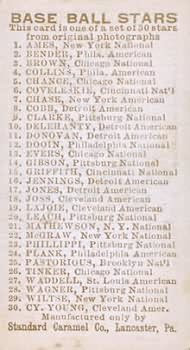