Just four years after capturing their only World Series in Brooklyn, the re-minted L.A. Dodgers turned the trick again in California. They beat the Chicago White Sox in 6 games despite being shut out twice. (In game 5, Sandy Koufax failed to clinch, losing 1-0 at home; Larry Sherry finished the series in Comiskey Park two days later.) 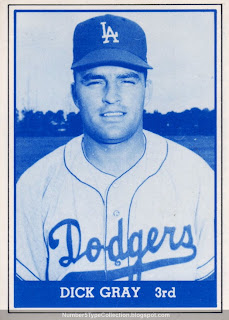 Card front
Dick made his MLB debut as L.A.'s opening day 3rd baseman in 1958 and hit 2 homers to key a 6-5 win. Unfortunately, he never locked down a regular role and the Dodgers traded Gray to St. Louis partway through 1959. 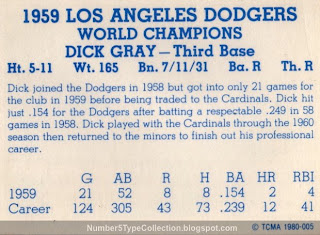 Card back
Many fans know Bill Mazeroski anchored 2nd base for the Pirates for 15 years and eventually made the HOF, largely on his defensive abilities. You might not know Pittsburgh had another excellent player, Julian Javier, stuck behind him at the same position. Dick Gray was one part of a 1960 trade that moved Javier to St. Louis, where Julian became the Cardinals' everyday 2nd baseman for a full decade and made 2 All-Star teams.
Value: This card cost $1.50 on Beckett Marketplace in January 2010, typical for oddball singles from the 1970s and 1980s. Superstars from this set like Koufax, Drysdale, and Snider cost about $5-10.

Fakes / Reprints: I've never seen reprints of TCMA highlight sets and assume the value and demand are too low to be worthwhile.

Related set profiles on this blog: