"Remember that bloody war we fought just 4 years ago? Get on the plane, fellas, it's time for a diplomatic 'road trip.' Bring your glove." 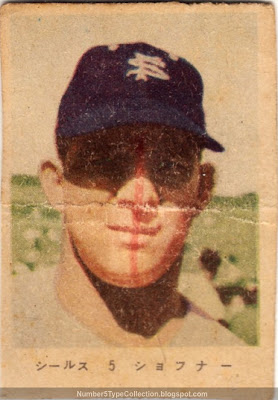 Yakyu Shonen, a kids baseball magazine, printed this 128-card set to promote the Seals' tour and Japan's own pro teams. Cards are small, at less than 2" x 3", and come on fairly thick stock. (Based on the size, I think 12 fit on a page.) Collectors hand-cut them to individual cards, which explains my scan's curved right border. All text is in Japanese, apart from the numbering. (The front translates as "Seals #5, Shofner.")

The Seals' touring team included a few major leaguers and even Lefty O'Doul took the field a few times. None other than General McArthur, effectively the country's "ruler" through 1951, considered the trip an enormous goodwill success. (He also requested a baseball tour personally, so held a stake in its outcome.)

It's hard now to appreciate the excitement this tour generated in Japan, but if you live near SF, see the the Society of California Pioneers own 1949 baseball tour exhibit, which runs through spring 2010. Several former players also discuss the trip in San Francisco Seals 1946-1957: Interviews with 25 Former Baseballers. 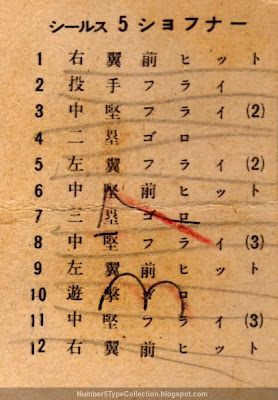 Some quick, USA Today-style factoids about the Seals team and Frank specifically.

Read more about Lefty O'Doul's significance to baseball in Japan at Wikipedia and the Japanese Baseball Cards blog. MLB.com also dedicates a section of their site to Japanese baseball tours.

UPDATE: Found this scan of an original magazine, showing both cover and card insert layout. 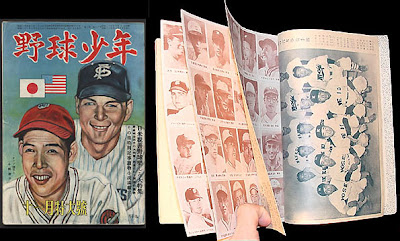 Fakes / Reprints: Haven't seen any reprints, but it could definitely happen. This is a rare set with a select collecting audience, so watch for too-good-to-be-true deals and buy from a dealer who knows their stuff.
Posted by Matthew Glidden

Thanks! The card turned up quite unexpectedly and it's very cool.

Those baseball tours are an interesting way for different countries to interact. Hope I can find others in the same vein!