I love this casual shot of the 1980s' most intimidating pitcher, Dave Stewart. Good lighting and complimentary card-uniform coloring make it one of TCMA's best. 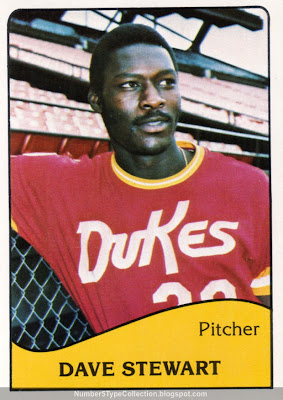 Card front
Though the Dodgers drafted him as a catcher, Dave quickly switched to pitching exclusively and reached the bigs for a single game in 1978. LA "seasoned" him for a few years, including a 2-year stint for Albuquerque, and added him for relief duty during their 1981 championship run. 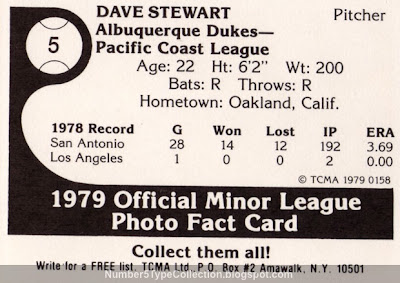 Card back
Dave threw a no-hitter for Oakland on June 29, 1990, just prior to Fernando Valenzuela turning the trick for the Dodgers. It remains the only time pitchers hurled no-hitters in both leagues on the same day. But hey, let's see some intimidation!

"Dave Stewart would scare the crap out of me..."
Value: Dave won 3 World Series rings (Dodgers, Athletics, Blue Jays) and almost 200 games, so fans want more of him than your average minor leaguer. This Dukes card cost $5 on Beckett Marketplace.