On Feb 15, Topps launched their 2010 set tie-in, the Million Card Giveaway. Collectors redeem card codes for one of many, many past cards. Ideally, you get a classic HOFer like 1962 Topps #5 Sandy Koufax. More likely, it'll be 1989 Topps #323 Gary Thurman.

Night Owl Cards posted his day 1 redemptions, which included an action-filled 1987 Topps Kevin Bass. (Details and scans at "There are a million other things I should be doing...") I say, why stop at just one? 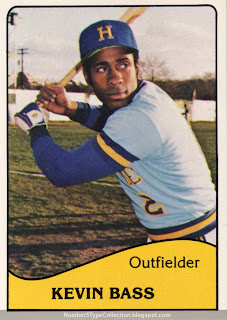 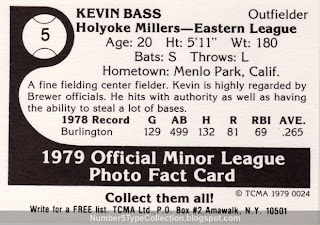 Card back
For a team that folded in the 80s, they've got a pretty active Facebook group!

Value: Kevin Bass cost me $1 from Beckett Marketplace, in the usual range for minor league "commons."

Fakes / Reprints: Haven't seen any reprints of 1970s minor leaguers, other than guys who eventually made the HOF.
Posted by Matthew Glidden