It warms my heart to see guys from Superbad getting work in the world of sports AND their own card to boot. (Outside of Hawaiian drivers licenses.) 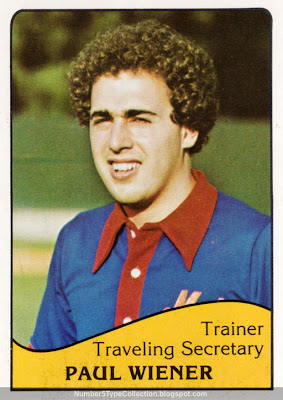 Card front
Is there anything to add for a card of this visual magnitude? If only TCMA's "yellow wave" didn't obscure the Mets logo, we'd have a blue, red, and orange miracle of modern fashion. Don't know about you, but I would love to have that shirt. 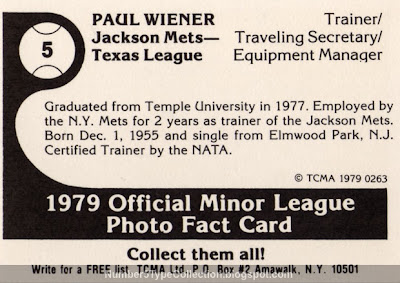 Card back
As equipment manager, I bet Mr. Wiener contributed a great deal to this story, courtesy of the team's Wikipedia entry.

"In one of the more interesting moments in franchise history, on the evening of 22 June 1978, Mets outfielder Mookie Wilson married Rosa Gilbert at home plate in Smith-Wills Stadium. The ceremony concluded with the couple walking back to the dugout beneath an archway of bats held aloft by Mets teammates. Wilson would become one of at least a dozen Jackson Mets players to wed girls they met during their tenure in Jackson."

Jackson (Mississippi) served as the Mets' AA affiliate from 1975 to 1990, before moving to Binghamton, NY, a good deal closer to the home team.

Value: This card cost $1 on Beckett Marketplace, typical for players that didn't find success in the majors.

Has someone's name ever so clearly matched their picture on a baseball card? I sincerely doubt it...

I also wonder if Mr. Wiener reviewed this card and said YEAH OKAY WHATEVER. Plenty of them feature squinting players--this is the king.