One of the first relievers elected to the HOF, Bruce Sutter pioneered the use of the split-finger fastball and held the NL saves record from 1982 to 1993. Known primarily as a dominant closer for the Cubs, Bruce won a World Series ring with the Cardinals in 1982 and saved his 300th (and final) game with Atlanta in 1988. 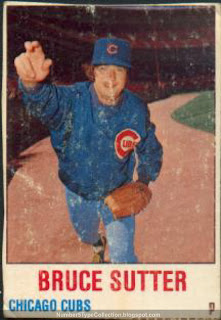 Did you know Sutter only pitched in 12 big-league seasons? The Hall of Fame set a 10-year minimum to be considered for induction, so he overcame both "short career" and "relief pitcher" in reaching Cooperstown.


Like other Hostess sets profiled on this site, 1978 cards came on panels of three players. My scan shows the varying quality of trimming, with only a bit of dotted line visible along the bottom and uneven top and left edges.

There are enough Hostess cards and panels around to keep prices relatively low. A friend sent this Sutter card in a trade, but you can find it on eBay for under $3 and on a complete panel for less than $10.