Today’s guest looks lost in a fugue beneath the unknown security of an earflap-less helmet. Based on fan count, the photographer shot this mid-game. Perhaps he rousted Mr. Parker off the bench and away from an interesting sunflower seeds vs. tobacco debate? That would definitely leave me with a listless expression. 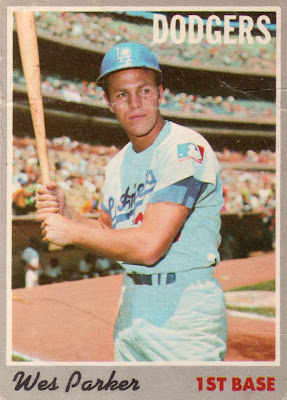 Card front
Wes manned first base for the Dodgers from 1964 to 1972 and won six gold gloves, earning a reputation as the position’s best active fielder. (He's the only non-HOFer voted to baseball’s all-time Gold Glove team!) Pitching's sheer dominance in the late 60s--and LA’s batter-hostile home stadium--explain why a .267 career average (and warning-track power) produced a respectable 111 OPS+.

My trading partners call 1970 Topps “cool grays,” so are French-Canadian OPCs “refroidir les cartes grises?” (Credit Google translation for that one.) Unlike 1971’s strong black borders, this smooth texture wraps unobtrusively around the photo and seems easier to keep in good condition. Black edges tend to chip, which some unscrupulous people “repair” with ink markers. 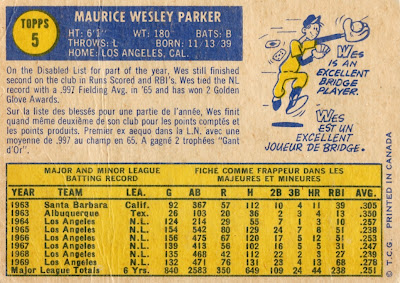 Card back
Do you have any of these northern cousins? Each OPC card says "Printed in Canada" in small type, but French remains its dead giveaway. Though "Gold Glove" sounds good on its own, "Gant d'Or" adds a touch of class, Cannes Film Festival style. It'd be very interesting to see how well-developed a youngster's language skills would become using only OPC card backs.
Posted by Matthew Glidden