I think Frank Robinson loves baseball more than Cheez-Its love orange food coloring. Already one of the all-time best players, he took over as player-manager for Cleveland in 1975, helmed four different franchises prior to retirement in 2006, and continued to work as an MLB executive. If any man deserves a special subset of career highlights, it's Frank.

Today's card highlights Robinson's debut as Cleveland's manager on April 8, 1975. Slotting himself at DH, Frank homered off Doc Medich in the first inning, a game Cleveland won 5-3 over the Yankees. (Gaylord Perry pitched the complete game win; he and older brother Jim Perry both started the year as Indians, but departed by mid-season trades to Texas and Oakland, respectively.) 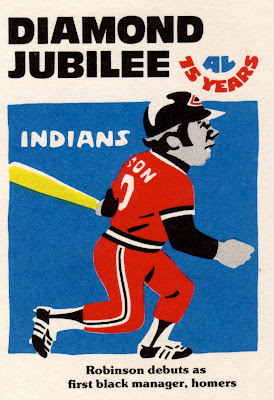 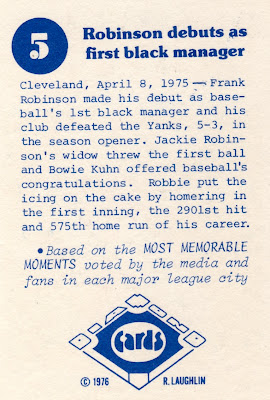 Card back
Value: I've seen this set on oddball tables for ~$80 at shows. It includes lots of Hall-of-Fame players and individual cards run $1 to $10.

Fakes / reprints: Haven't seen any fakes in the marketplace and it seems unlikely, given the set's low profile.

Technically the set celebrates both the AL 75th anniversary AND the NL 100th. Cards alternate between each league across the checklist with only one exception where two consecutive AL cards appear. Robinson’s feat is second most recent behind Ryan’s fourth no-hitter.

Good note, I'll add that to the set profile.