Congratulations to the Philadelphia Phillies, as they return to defend their 2008 World Series trophy. With over a century of franchise history and only a pair of titles to show for it, the chance to go back-to-back seems like spitting against a stiff October wind. Fortunately, they continue to improve year-to-year and look more than ready to face either the Yankees or L.A.'s younger brother.

2009 marks only the 2nd time Philly reached the playoffs 3 consecutive seasons, matching a run from 1976 to 1978. In the 60 years prior to America's bicentennial, only 1 of their teams made the post-season at all: 1950's "Whiz Kids." In 1980, TCMA recalled this high-energy squad in a 31-card set; #5 pictures 17-game winner Curt Simmons. (And hey, The Phillies Room blogged this set just last month!) 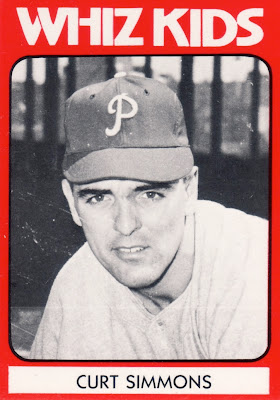 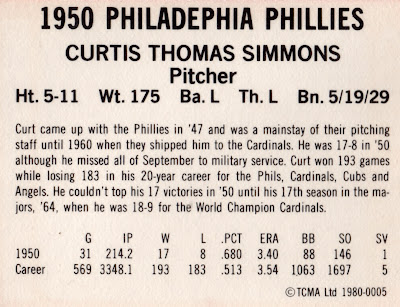 Card back
The 1950 and 2009 teams both stand out for their average age, but at opposite ends of the spectrum. Future Hall-of-Famers Richie Ashburn and Robin Roberts, both only 23, headed 1950's collection of "kids." Only 1 position regular had reached 30 and closer Jim Konstanty was the pitching staff's "old man" at 33. This year, guys like Jamie Moyer (46), Pedro Martinez (37), and Chan Ho Park (36) make new acquisition Cliff Lee (30) below Philly's average age.

1950's lineup hit for an OPS+ of 102 and pitched a lights-out ERA+ of 116. With a competent lineup and superior pitching, which outcome's most surprising?


Should Philly face the Yankees, it'll be their first post-season meeting since that 1950 series and you can expect a few callbacks to the Whiz Kids. Hat tip to Baseball-Reference.com for the gents from that roster who are still with us.

This is a nice little set, and I'm glad it's finally in my collection.

This brings back memories of going through the Baseball Advertisers and circling teams that I liked. I never got around to ordering any of them, but I wish I had.

This is certainly one hobby that's transformed by the net. RIP all those baseball ad catalogs!