TCMA is best known for two things, minor league team sets and retrospectives that show off their stock of vintage photos. This set falls into the latter category and features the 1914 Miracle Braves. They're almost lost to history at this point, but represent one of the greatest turnarounds in sports, going from last place in July to World Series champs in October. (Thanks to Wikipedia for the link and see its article for an excellent game 3 photo of Fenway Park.) 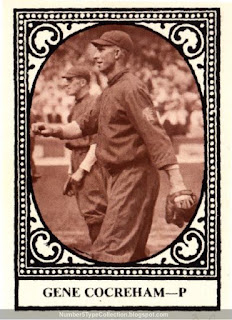 Mr. Cocreham pitched infrequently for Boston that year, starting only three games and participating not at all in the series itself. That doesn't mean the card lacks interest, though. My little eyes spy a certain square-jawed Hall-of-Famer in the background, Johnny Evers. That penultimate member of the poetic Cubs double-play combo won his third championship with the Braves in 1914, following two with Chicago.

While critical to one's chances in Canton, the baseball HOF voters often look past "number of titles" as a prime determinant for one's candidacy. In the case of Tinker-Evers-Chance, however, the 1907 & 1908 series wins could be the main reason the 1946 Veterans Committee proved willing to induct a trio of decent-but-not-great players into Cooperstown--not just the creative efforts of Franklin Adams. Some fans support inducting the 1970s Dodgers infield as a unit and this is basically the old school equivalent. (In that vein, sometimes baseball research will turn up the question "Who was Harry Steinfeldt?" He was the Cubs third basemen--the "Ron Cey"--for those championship teams.)
Posted by Spike Glidden