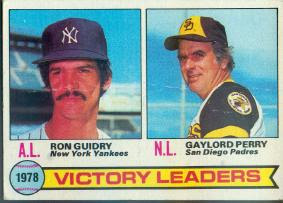 Hey, it's another leaders card! Topps limited it to each league's top banana, however, and this pair of guys couldn't be more different. Guidry looks all business as the young ace, 25-3 in 1978, who can't wait to mow down another 27 guys. Perry seems mightily amused that 1978 saw him become the first player to win a Cy Young in both leagues--and at age 39. (He went 21-6 with a 2.73 ERA for the 84-78 Padres.) It'd be entertaining to have the two face off in their prime, if only for the contrast in styles, dominance versus guile (or spit).

That raises a question: is Perry famous for throwing spitballs, or famous for being reputed to throw them? He claims Bob Shaw (featured on yesterday's 1963 #5) taught him the pitch in the mid-60s. Plenty suspect he threw doctored pitches every game, leading opposing managers and umpires to regularly check his glove and uniform for shenanigans. Most of the funnyball stories (true or false) came via recollection and my favorite was told by former Mariner Julio Cruz following the final game at the Kingdome, where Gaylord was a guest.

"I remember it well, that final out for 300. Willie Randolph grounded a ball to me at second. I fielded it and carefully picked it up from the dry side..."

The Baseball Page notes that Perry wore a different uniform every inning during his 300th win, an avant garde take on memorabilia re-selling new to the 80s but more familiar to today's collector.

Guidry and Perry faced off as 1983 Opening Day starters, Seattle hosting New York. As it happens, both pitchers were gone by the 6th inning and neither figured in the decision. However, that was the exception for Ron and the rule for Gaylord. Of 30 starts that season, Perry finished only 3. Guidry went on to throw 21 complete games in 1983, easily the league leader. (For perspective, remember than Roy Halladay led the majors with 7 CGs last year and the runner-ups had only 4.)

After my LL design critiques yesterday, I like this clean layout much better. Two leagues, two guys, and no floating heads. Of course, it's not perfect. Adding the actual number of victories to the front would've been an easy improvement. Mentioning they were both Cy Young winners would've been a bonus.
Posted by Spike Glidden