Numbering a set seemed an afterthought at the dawn of baseball's card era. Companies printed them as promotional materials, like banks make calendars and pizza places make magnets. I don't know of any individually numbered cards from the 19th century and the "E" cards from 1909 and 1910 include a complete checklist on each card back rather than actual digits. Is it fitting that a non-American company would be the first to organize a set this way? 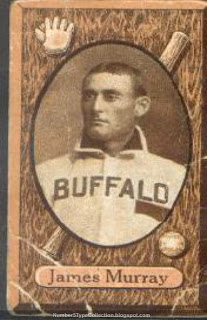 Card front
This 90-card effort from Canada's Imperial Tobacco company presents players in the "minor" Eastern (aka International) League respectably with sepia-toned studio photos. Two HOFers prove its key cards, Joe Kelley and Iron Man McGinnity. Buffalo's Jim Murray might not be an essential component, but he looks pretty good for being close to 100 years old. 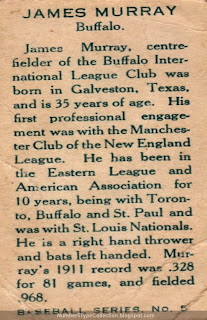 Card back
As best I can tell, Mr. Murray appeared in very few major league games. After a handful of hacks in 1902 with Chicago, he bounced around other leagues until 1911, resurfacing in St. Louis for about 100 at-bats. Both years yielded a sub-.200 batting average with little power, so it's somewhat surprising the Braves picked him up in 1914. At least he "rewarded" them with a .232 performance, pulling his lifetime average north of the Mendoza line. (.203!) The St. Paul Saints purchased the 36 year-old in mid-1914 and he presumably wrapped up his career there or soon after.

Speaking of St. Paul and minor leagues in general, I'm halfway through Wild and Outside by Stefan Fatsis, which highlights the mid-90s rebirth of the Saints. Most don't expect lower leagues to really compete with the AL and NL these days. If anything, they move players up the ladder to their "peak" (A, AA, AAA, or MLB) and gradually--or quickly--drop anyone stuck in denouement. As an independent team, the Saints prove a good counter-point to this view, paired geographically as they are with the Minnesota Twins. The situation probably parallels how the Eastern League sought to succeed in the shadow of the majors' lock on most northeastern cities back in 1912. More to say once I'm done with the book itself!

Value: This obscure set doesn't get much attention, so remains affordable. A low-grade eBay auction closed at $15 in March 2010.

Fakes / Reprints: Like most tobacco sets, this is vulnerable to reprinting. The relatively low value lessens the risk, but definitely find out something about a card's history if you plan to get one.
Posted by Spike Glidden