This card kind of creeps me out, so it'll go by as quickly as possible. 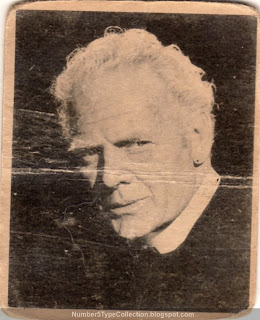 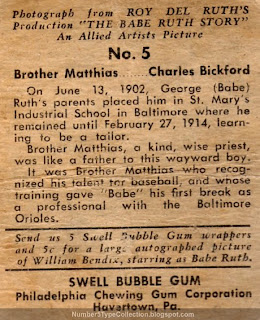 Card back
1948 saw the release of The Babe Ruth Story, a little-regarded film about Ruth's life and gargantuan impact on the game. The Philadelphia Gum Company turned out a fairly small set to "celebrate" (i.e., cash in on) its release; each card tracks a character or event from the film.

The crafty veteran pictured here is Charles Bickford, who portrays the young Ruth's strong-handed spiritual guide, Brother Matthias of the reformatory St. Mary's Industrial School for Boys. This education, at least from Matthias, included the game of baseball. From what we can tell, the Babe's early skills developed almost entirely during his time at St. Mary's.

The speed of Ruth's introduction to the game bears little resemblance to what players go through today. At 19, he signed with Baltimore early in the 1914 season and appears on one card as an Oriole. They dealt him to Boston on July 9th. Ruth pitched (and won) his first game on July 11th. With little room on the roster for raw talent, the Red Sox sent him to Providence for most of the season's second half. These days, who knows? As a good young pitcher, perhaps teams would've stashed his good arm in a southern league for "seasoning" as a #2 lefty starter and told him to ignore that batting nonsense.
Posted by Spike Glidden